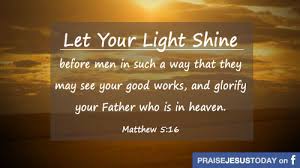 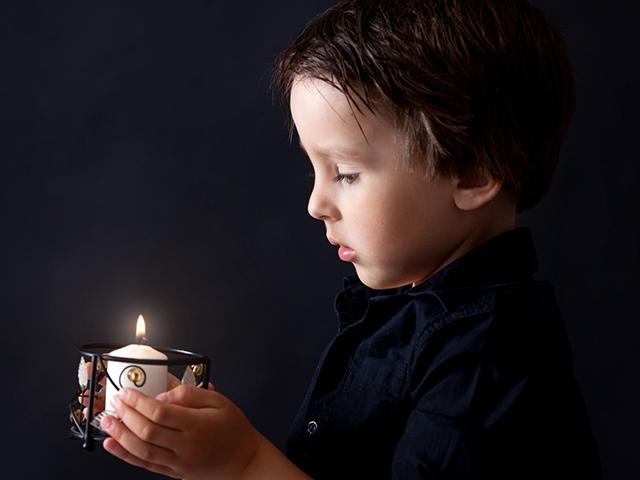 Lessons can be learned with just about anything or in everyday life experiences.

The other night, my son was up late and he was looking for our cat, Bella, in the dark. He didn’t want to wake me as the kitchen is next to my bedroom, and I had left the door cracked for my cat to come in since she likes to lie under the desk.

Seeing that light, I ventured into the kitchen out of curiosity. I saw that he had opened the refrigerator door to peer around the corner to the living room to see if Bella’s shadow was in the window sill. It worked! The tiniest light can brighten up a room.

Are we lights for Jesus for all to see? The curious will wonder why we are different. We should dispel the darkness wherever we go.

Do you remember the story about the ten virgins? They had oil lamps, but some had used up their oil and did not have any. They had failed to keep their lights burning and when they needed it, they were frantically searching for some light. But, it was too late.

Others were wise and kept their lights shining brightly. Jesus is the way, the truth, and the light, and He is the light of the world. When we accept Him in our hearts that light also shines in us for others to see.

As His followers, we must continue to read the Bible, fellowship with believers in church to grow and pray for direction, and pray for others to keep our lights shining at all times for the world to see.

If we keep our focus, and our gaze fixed upon the Lord, then others will see us shine and be drawn to the light of God’s love. They are groping in darkness without the knowledge of Jesus and how much He loves them, so we must keep our lamps filled with the oil of the spirit of God.

There is something in the countenance of the ones who stay close to Jesus. It comes from the inside to the outside. It comes from our hearts, and His love is reflected in our eyes and in our smiles to a lost and hurting world.

I have a replica lampstand from Jerusalem of the seven candlesticks. It was an important piece in the tabernacle of Moses, and it reminds me to keep my light burning and to pray for those who need to know that Jesus is the Light of the World.

If a matchstick flame can lighten up a room, can you imagine how much our lights can dispel the darkness in the world? I urge you to not let your flame grow dim.

“At that time the kingdom of heaven will be like ten virgins who took their lamps and went out to meet the bridegroom. Five of them were foolish and five were wise. The foolish ones took their lamps but did not take any oil with them.”

Then make its seven lamps and set them up on it so that they light the space in front of it. Its wick trimmers and trays are to be of pure gold. A talent of pure gold is to be used for the lamp stand and all these accessories. See that you make them according to the pattern shown you on the mountain.” Exodus 25:31-40 (NIV)

Deuteronomy 30:6 (NIV) 6The LORD your God will circumcise your hearts and the hearts of your descendants, so that you may love him with all your heart and with all your soul, and live.

In the April 3rd devotion we looked at Deuteronomy 10:16. There the Lord commanded us to circumcise our hearts. Here, He says that He will circumcise their hearts and that of their descendants. This expression comes after the Lord promised to return them from the lands to which they were driven. I believe we have yet to see this fulfilled. We have not seen an Israel sensitive to God, but one over whose faces a veil has been placed. But in our day we have seen another return to the Land. Is the time approaching in which the times of the Gentiles will be over and the time for the Jewish people to have their hearts circumcised by God to begin?

As we wait and watch, we should allow God to do that work in our hearts. He will make us ever more sensitive to Him if we allow it. That is His desire. He will not do so against our wishes. He waits for our permission to do a deeper work in each of us. It is a deeply personal relationship that is willing to have a love that feels the joys and pains of another. Are you willing to share God’s burdens? He shares yours. Are you willing to rejoice at the things that rejoice His heart? If you have His Spirit residing in you, then you already do. Still, you can be increasingly sensitive to His heart.

Consider: Invite God to do a deeper work. Take time to share His joys and pains as He does with you. Never be too busy to do so. He is never too busy for you.

Have you ever had someone tell you to, “Just be yourself and everything will work out”? It sounds so simple, doesn’t it? “Be Yourself.” What does that even mean? After all, if we could simply “be ourselves,” then wouldn’t the world that surrounds us be a lot different?

I often wonder what friendships would be like if we could simply be who we are inside; to not feel so much pressure to be less or more of an individual than we think we are supposed to be. One thing I’ve begun to focus on in recent months is being the same person everywhere I am no matter who I’m around, but that’s a lot easier said than done.

Don’t get me wrong. I realize that none of us are exempt from sin. 1 John 1:8-10 says this: “If we say we have no sin, we deceive ourselves, and the truth is not in us. If we confess our sins, he is faithful and just to forgive us our sins and to cleanse us from all unrighteousness. If we say we have not sinned, we make him a liar, and his word is not in us.”

Can you see how not dealing with sin appropriately keeps us from being ourselves? Behavior like this causes us to trick ourselves into thinking we are someone who we really aren’t. When we ignore or hide sin, it breeds all kinds of issues, not only in us, but also in the body of Christ.

So how should sin be handled? How can you “be yourself?” Well, here are 3 things that will certainly get us going in the right direction: Confession, confrontation, and forgiveness.

We all know that we are supposed to confess our sins to God, but what about confessing our sins to one another? Where does that fit into the picture? The answer lies within James 5:16, which instructs us to, “…confess your sins to one another and pray for one another, that you may be healed. The prayer of a righteous person has great power as it is working.” Why isn’t the confession of sins more of a focus in the church today? Shouldn’t we be doing this every chance we get if it results in “healing and righteousness?”

Secondly, there is confrontation. Jesus says in Matthew 18:15-17 that, “If another member of the church sins against you, go and point out the fault when the two of you are alone. If the member listens to you, you have regained that one. But if you are not listened to, take one or two others along with you, so that every word may be confirmed by the evidence of two or three witnesses. If the member refuses to listen to them, tell it to the church…” Notice that this scenario starts with someone taking the initiative to point out the sin. Also notice that this person risks not only putting his friend in an uncomfortable situation but also being humiliated in front of others if he is wrong about his assessment. It’s easy to see why the church struggles with this; it’s not a simple solution.

Lastly, we have forgiveness. After discussing confrontation and confession, doesn’t forgiveness make a lot more sense now? There is a very good reason why Jesus instructed us to forgive, “seventy times seven times ” in Matthew 18:22. Jesus knew we were going to be surrounded by sinful people because we live in a sinful world. Rather than avoiding it, we need to be brave enough to be the one who chooses to forgive sin unconditionally and infinitely. Our reaction to sin determines the impact it is able to have on us. Who knows? Our reaction may even be so powerful that it may stop that sin in its tracks before it affects others too!

I’m totally convinced that this is how we should be handling sin. And since sin is “at enmity with God” then shouldn’t we be doing everything we can to remove it from the bride of Christ? Shouldn’t this be a primary focus in our lives rather than striving for what we can gain in life? Jesus is waiting for a bride with no blemishes.

Today, just take about 15 minutes and ask God this simple question: “God, how is the sin in my life keeping me from being who you have created me to be?”

“You shall not even go out from the doorway of the tent of meeting, or you will die; for the Lord’s anointing oil is upon you.” – Leviticus 10:7 NASB

Even though Nadab and Abihu were the sons of Aaron the priest, they died after offering “strange fire before the Lord” (v. 1). We may wonder why the penalty was so severe. “By those who come near Me I will be treated as holy, and before all the people I will be honored” (v. 3). God was teaching important principles. He is holy, and those who represent Him are held to higher standards.

God reminded Aaron and his remaining sons to remember that as His anointed servants, they had to be ready to speak for Him and be His examples. They, too, had to be able to “make a distinction between the holy and the profane, and between the unclean and the clean” (v. 10). He had anointed them and given them special privileges and blessings. But they also had special responsibilities and were set apart to serve Him.

These same principles are true today. As we serve God, He is ready to give us unimaginable wisdom, teach us secrets, and bless us in every area of our lives. But we also need to realize that serving Him comes with responsibilities.

You belong to God. Allow Him to open your eyes to the gifts He has given you. Be available to allow His power to flow through you. Be ready to receive His anointing. Live before Him in holiness and purity, listen to His voice, be ready to serve Him.

God is not unjust; he will not forget your work and the love you have shown him as you have helped his people and continue to help them.
Hebrews 6:10
DailyVerses.net