12 When Jesus spoke again to the people, he said, “I am the light of the world. Whoever follows me will never walk in darkness, but will have the light of life.”

13 The Pharisees challenged him, “Here you are, appearing as your own witness; your testimony is not valid.”

14 Jesus answered, “Even if I testify on my own behalf, my testimony is valid, for I know where I came from and where I am going. But you have no idea where I come from or where I am going. 15 You judge by human standards; I pass judgment on no one. 16 But if I do judge, my decisions are true, because I am not alone. I stand with the Father, who sent me. 17 In your own Law it is written that the testimony of two witnesses is true. 18 I am one who testifies for myself; my other witness is the Father, who sent me.”

Light of the World 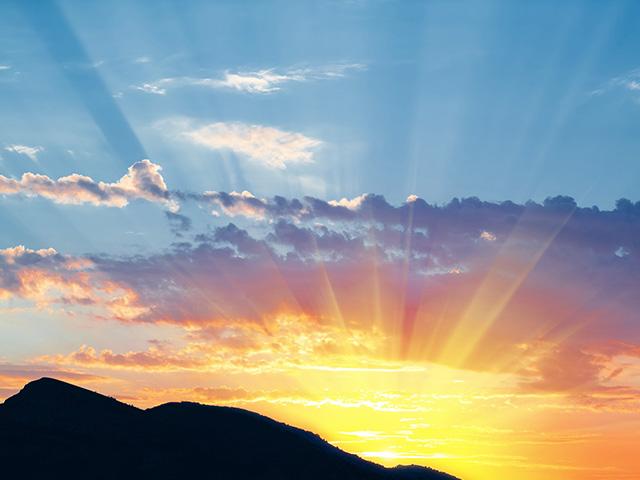 When the queen of England knighted Sir Isaac Newton, it was the first time a scientist was honored this way. He was a brilliant scholar with a wide range of interests: from mathematics to natural philosophy, from the laws of motion to the laws of gravity, from the study of optics to the study of theology.

His first series of lectures at Trinity College, Cambridge, was on optics. Other scientists had begun the scientific revolution, and the study of light was a central theme. Newton made significant contributions to the scientific understanding of white light and color. He even built the first reflecting telescope.

Light is indeed a fascinating topic, and because it’s so significant, Jesus used it as a metaphor for himself when he made the statement,

There are at least five reasons why light is important, and these factors provide insight as to what the Lord was saying.

First, light is essential for vision. Have you ever noticed as the sun goes down late in the day, shadows grow darker, and it’s more difficult to see? If the moon and the stars aren’t in the night sky, by the time it’s pitch black you see nothing.

Light is also essential for color. As the light dims, colors fade. For this reason, light is a necessary ingredient for beauty in the world.

Third, the earth’s food chain depends on light. Photosynthesis is the process whereby plants use the energy of light to produce food. In other words, without light, there is no life.

It’s also worth noting that for a lot of people, light is a key element of happiness. Many studies have shown higher levels of depression where there is less natural light. This seems to be true for some who work indoors, as well as for those who live in areas where there are seasonally shorter days.

One more observation is that light can drive away fear. When our son was five years old, we’d put him to bed at night, singing a song and praying with him before turning out the light. In a few minutes, we’d hear him yelling, “There’s a wolf!”

“Yes, there is. Would you leave the light on?”

When the light was on, he could see, so he wasn’t afraid. But in the dark, his imagination went into gear, and he was afraid.

The impact when Jesus comes into a person’s life is similar to what light does in the natural world. He opens our eyes, giving us vision. He adds color and beauty to our lives. He brings life and happiness, and drives away fear. Our Creator already knew what Sir Isaac Newton and other scientists took years to figure out, because he created light.

In Matthew 5:14, he who is the Light of the World turns to his disciples and in a stunning plot twist tells them, and us,

“You are the light of the world” (HCSB).

We are called to be Christ to our world. The effect of our interacting with people and the planet should add vision, beauty, life, and happiness. And, wherever there’s a Christian presence, there should be less fear.

In the same way “God did not send His Son into the world to condemn the world,” but to save. John 3:17 (NKGV), he sends us into the world with the same mission. When we represent the Lord the way he hopes we will, that’s when the church is at its best, becomes most productive, remains relevant, and changes the world.

“They looked unto him, and were lightened: and their faces were not ashamed.” Psalm 34:5

See there he sits in heaven, he has led captivity captive, and now sits at the right hand of God, for ever making intercession for us. Can your faith picture him today? Like a great high priest of old, he stands with outstretched arms: there is majesty in his demeanour, for he is no mean cringing suppliant. He does not beat his breast, nor cast his eyes upon the ground, but with authority he pleads, enthroned in glory now. There on his head is the bright shining mitre of his priesthood, and look you, on his breast are glittering the precious stones whereon the names of his elect are everlastingly engraved; hear him as he pleads, hear you not what it is?—is that your prayer that he is mentioning before the throne? The prayer that this morning you offered before you came to the house of God, Christ is now offering before his Father’s throne. The vow which just now you uttered when you said, “Have pity and have mercy,”—he is now uttering there. He is the Altar and the Priest, and with his own sacrifice he perfumes our prayers. And yet, mayhap, you have been at prayer many a day, and had no answer; poor weeping suppliant, you have sought the Lord and he has not heard you, or at least not answered you to your soul’s delight; you have cried unto him, but the heavens have been as brass, and he has shut out your prayer, you are full of darkness and heaviness on account of this, “Look to him, and be lightened.” If you do not succeed, he will; if your intercession be unnoticed, his cannot be passed away; if your prayers can be like water spilt on a rock which cannot be gathered up, yet his prayers are not like that, he is God’s Son, he pleads and must prevail.

For meditation: The prayers of the true seeker and of believers are not a waste of effort; they are not like letters lost in the post, but reach the throne of God (Acts 10:4; Revelation 5:8). But only praying in the name of the Lord Jesus Christ is accepted; prayers addressed to saints, to false gods or to the dead are always turned away—“not known here.”

“For my thoughts are not your thoughts, neither are your ways my ways,” declares the Lord.
Isaiah 55:8
DailyVerses.net