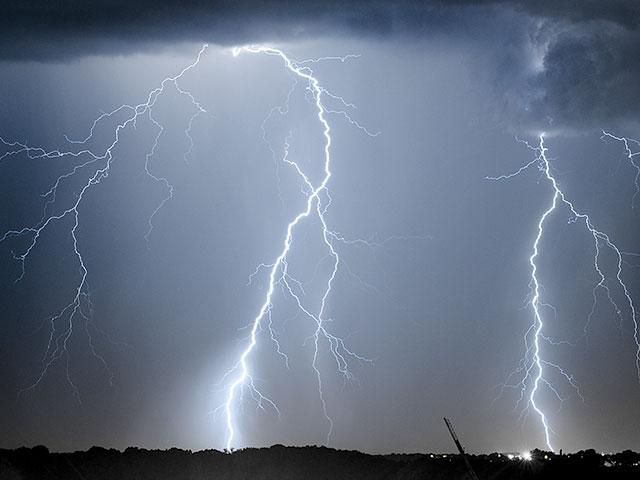 This past Sunday, my parents, grandparents, and I were on the road home from a family reunion. During our four-hour trip we encountered the worst thunderstorm I’ve driven through in a long time.

The rain was so intense we could only see a few feet in front of us. Other drivers were slowing down, putting on their flashers, and some were even stopping on the side of the road. Along with the heavy rain, the wind was also whipping against everyone’s vehicle.

The experience was a little chaotic; however, I gained total peace from seeing how my dad, who was driving, reacted to the situation. There he was with his eyes fixed on the road while we were all frantically yelling stuff at him like, “Pull over, Slow down, Watch out!”

Despite all the commotion, he kept on driving right through the storm. According to his thinking, he wasn’t going to stop and risk having a bad accident or getting stuck because of a few fearful passengers.

When we are going through a storm, it’s easy to want to quit. There is no reason to keep going when all the signs show the road ahead to be too dangerous. Or is there?

Some people stop at the first site of adversity because they don’t think they have what it takes to survive the storm. When in all actuality God has infused us with every bit of strength we need.

“We don’t have the right to claim that we have done anything on our own. God gives us what it takes to do all that we do.” (CEV)

Even if you find yourself in a difficult situation like my dad and everyone is yelling at you to stop, don’t listen to them; listen to what the Lord is saying. He alone is the one who can help us refocus our attention, calm our anxiety, and steady our course.

The beginning verse in Psalm 91 describes what happens for those of us who dwell in God’s secret place:

“He who dwells in the secret place of the Most High shall remain stable and fixed under the shadow of the Almighty [Whose power no foe can withstand].” (Psalm 91:1, AMPC)

Two words that really stick out to me in this verse are stable and fixed. Yes, it is possible to move forward in a storm and stand firm on the inside at the same time. Why? Because wherever we are in this world we’re covered under the shadow of Almighty God. His shadow follows Him constantly just as our shadow follows us. We could go to the ends of the earth and still not escape the shadow that follows.

David knew exactly where he was supposed to be in times of trouble. Crouching down in fear is not the proper place for men or women of God.

We have to have the same boldness and resolve to pray as David did in Psalm 57:1,

Another key factor for surviving life’s storms is staying in close company with some godly leaders. True godly leaders are visionaries and they can see beyond the struggles we face. As John C. Maxwell writes,

“Leaders see life as it could be. They are always seeing a little farther, a little more, than those around them.”

If it were not for leaders like this in my life, I would have stopped many times short of God’s desired best for me.

So, it is a guarantee that storms will come and they will pass. But it is what we do in the middle of them that makes us victorious. And if fear tries to take over, we can just look unto our Heavenly Father and we will gain the peace we need to go through any storm.

It’s hard to know the best way to respond to people who represent your “opposite you.” Do you ignore them? Leave the room when they enter so you don’t say something you later will regret? Share a meal and discuss your differences? Dismiss your differences? How do you find and show acceptance toward someone when you would rather show them the door? The answer can be found in this admonition:

Accept one another, then, just as Christ accepted you, in order to bring praise to God. — Romans 15:7

We are creatures of comfort and creatures of habit. We like the familiar and predictable. We like agreement over conflict. Peace over disruption. These are the things that make us feel happy, content, at rest. And all these things — comfort, familiarity, agreement — are achievable as long as we interact only with people who are just like us. People who are part of the same political party, church denomination, ethnic group, or country. People who like what we like and dislike what we dislike.

This is all fine and good, but there is one problem.

To live in the world we live in today, we are bound to interact with someone who is different from us.

A coworker, someone next to us on the bus, a neighbor, classmate, teacher, or pastor. We have been created equal, but we have not been created alike. For this reason, if our happiness depends on being surrounded by people who agree with us all the time, we won’t feel happy very often.

In this week’s study, we will be looking at Romans 15:7, where Paul wrote,

Accept one another, then, just as Christ accepted you, in order to bring praise to God.

Could it be we are called to accept the Democrat and the Republican? The Midwesterner and Southerner? The immigrant and the native? The Catholic and the Protestant?

Further, Paul instructs us to accept one another as Christ accepted us. How did Christ accept us? He loved us so much that he made the greatest sacrifice for us. He died for us. Rose from the grave for us. Left the Holy Spirit to dwell within us. Christ welcomed us into the family of God. And this, the Bible says, is how we are to welcome others.

So open your mind and your heart as you explore today’s topic. Discover how accepting one another can make happiness happen in your own life — and for those you accept as Christ accepted you.

Everyone kept feeling a sense of awe; and many wonders and signs were taking place through the apostles. – Acts 2:43 NASB

Were the disciples superhuman? No. In fact, they were ordinary people. But, because they had been transformed by the Spirit, through them “many wonders and signs were taking place.”

Jesus had said that those who believed in Him would do “greater works than these … because I go to the Father” (John 14:12). The apostles proved that this really was true!

As they witnessed these transformed men and women, the crowds were amazed, and filled with “awe.” Seemingly unsolvable problems were solved. People with incurable diseases were healed. These untrained men spoke articulately with supernatural wisdom.

What would the disciples do if they were alive today? Would they be content with the ordinary? We almost can hear them tell us not to limit what God can do! In fact, we should expect “many wonders and signs” in our lives!

Is this possible for you? Absolutely! But what will it take?

Like the disciples, start with your personal relationship with Jesus. Spend time with Him. Pray. Listen to His voice. Grow in your knowledge of the Word. Be a faithful servant. Like the disciples, wait for an outpouring of the Holy Spirit! Let Him guide you.

Don’t be content with a mediocre faith. Be like those early disciples: humble, filled with faith, unafraid. Always be ready and available for the leading of the Spirit. You serve the God of miracles! For Him, nothing is impossible! He has not changed. He never will!

Streams in the Desert – September 10

There is a Divine mystery in suffering, a strange and supernatural power in it, which has never been fathomed by the human reason. There never has been known great saintliness of soul which did not pass through great suffering. When the suffering soul reaches a calm sweet carelessness, when it can inwardly smile at its own suffering, and does not even ask God to deliver it from suffering, then it has wrought its blessed ministry; then patience has its perfect work; then the crucifixion begins to weave itself into a crown.

It is in this state of the perfection of suffering that the Holy Spirit works many marvelous things in our souls. In such a condition, our whole being lies perfectly still under the hand of God; every faculty of the mind and will and heart are at last subdued; a quietness of eternity settles down into the whole being; the tongue grows still, and has but few words to say; it stops asking God questions; it stops crying, “Why hast thou forsaken me ?”

The imagination stops building air castles, or running off on foolish lines; the reason is tame and gentle; the choices are annihilated; it has no choice in anything but the purpose of God. The affections are weaned from all creatures and all things; it is so dead that nothing can hurt it, nothing can offend it, nothing can hinder it, nothing can get in its way; for, let the circumstances be what they may, it seeks only for God and His will, and it feels assured that God is making everything in the universe, good or bad, past or present, work together for its good.

Oh, the blessedness of being absolutely conquered! of losing our own strength, and wisdom, and plans, and desires, and being where every atom of our nature is like placid Galilee under the omnipotent feet of our Jesus.
–Soul Food

The great thing is to suffer without being. discouraged.
–Fenelon

“The heart that serves, and loves, and clings,

Walk in obedience to all that the Lord your God has commanded you, so that you may live and prosper and prolong your days in the land that you will possess.
Deuteronomy 5:33
DailyVerses.net