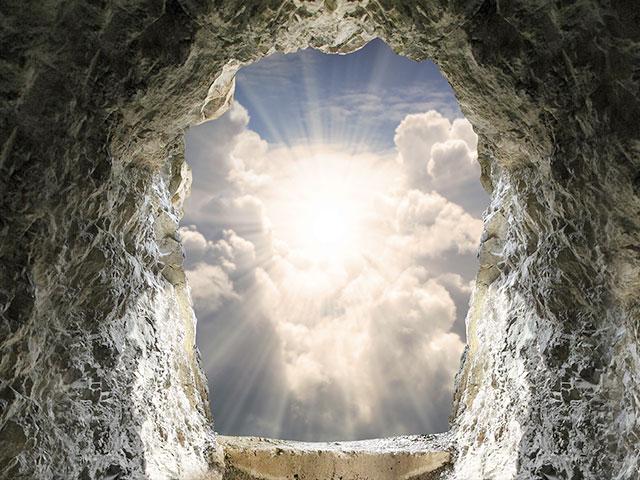 I was living up North several years ago when I first heard the phrase, “He Is Risen; He Is Risen Indeed!” The pastor loved to say the first part, He Is Risen, and wait with a big smile on his face for the congregation to finish the statement. (He Is Risen Indeed.) This was a favorite ritual every Easter Sunday morning.

Why did the pastor like saying it? I guess He knew it would fit with the sermon that day. He was sort of priming the pump, so to speak, for what was to come. Then a wonderfully, well-organized, properly prepared sermon on the death and resurrection of Christ would soon follow. Previous to this were three or four songs from the hymnal such as He Lives, He Arose, At Calvary, and At The Cross. It was the only Sunday we would sing these songs, so sing we did. We sang loudly and with a lot of heart.

I remember as a child that everyone wore fancy clothes on that day. It was the only Sunday that all the kids had new white shoes and pretty hats. Some of the girls even wore white gloves. Several of the moms and dads had a flower on their suits or dresses. Excitement was in the atmosphere. We knew an Easter egg hunt for all the children would begin after the service. There would be lots of beautifully colored hard-boiled eggs, jelly beans inside plastic eggs, hard candy-coated marshmallow eggs, and a very special large chocolate-covered candy egg. At home, I had a wonderful Easter basket filled with lots of candy and gum waiting for me too.

It marked the coming of spring. Pastel colors were everywhere. Flowers were blooming and the air was much warmer than a few weeks ago. It was such a happy time.

Now, I am older and I know Easter Sunday in a much different way. I now realize Easter is about death, burial, and resurrection. Jesus the Son of God was born so that one day He would die. He chose to become the sacrifice for your sins and mine.

“For God so loved the world that he gave his one and only Son, that whoever believes in him shall not perish but have eternal life” (John 3:16 NIV).

“For the wages of sin is death, but the gift of God is eternal life in Christ Jesus our Lord” (Romans 6:23 NIV).

“If we confess our sins, he is faithful and just and will forgive us our sins and purify us from all unrighteousness” (1 John 1:9 NIV).

It’s so wonderful. By faith we simply believe in the great price that was paid for us. We sinned, Jesus died on a cross to pay for our sins, and on the third day rose from the grave. He is seated at the right hand of God making intercession for us.

He paid a very high price. He gave His life. He suffered so that we can live forever with God. If we believe on the Lord Jesus Christ, we are saved. There is no condemnation for the things we have done. And with each mistake we now make, forgiveness is still ours to receive.

The tomb where Jesus was buried and from where He rose was left empty. Only the grave clothes were left behind. Because of His great love for us, and the power of God living in us, we too will one day be caught up with Him in the air.

“After that, we who are still alive and are left will be caught up together with them in the clouds to meet the Lord in the air. And so we will be with the Lord forever” (1 Thessalonians 4:17 NIV).

Jesus is coming again for those of us who have asked Him to forgive us our sins. We are waiting for that day when the heavens will open and we will meet Him in the skies.

So you see, Easter isn’t at all about Easter baskets full of candy, pretty clothes, or spring flowers. It’s about an empty tomb. He is Risen, He is Risen Indeed!

Show Me the Money

Bring the whole tithe into the storehouse, that there may be food in my house. Test me in this,” says the LORD Almighty, “and see if I will not throw open the floodgates of heaven and pour out so much blessing that you will not have room enough for it. – Malachi 3:10

Like many younger Christians, I have never been very good at tithing. Sure, I try to be generous, but I am never very consistent in my giving. Once in a while I’ll write a check for a good cause, support the occasional mission trip, but when it comes to the genuine, 10-percent of my labors tithes; I usually just give whatever happens to be in my wallet. There are a lot of excuses for my miserly behavior, but in all honesty, I think the real reason I didn’t tithe was because I just didn’t believe it was that important. Then I learned about Todd Stiefel.

Todd Stiefel is one of the major forces behind the modern atheist movement. His organization, the Stiefel Freethought Foundation, is behind the majority of atheist campaigns like flashy billboards, high-profile rallies, and other news-making efforts. According to CNN, Stiefel has poured over 3.5 million dollars of his own fortune into these projects. When asked why he would give so much to help fund these endeavors, Stiefel responded,

“I wanted to try to help the world. I wanted to give back and this seemed like the most productive way to help humanity.”

I can remember feeling very cold when I read that. Here was a man who did not believe in God. Here was a man who believed, fervently, that best way to help humanity was through the erosion of my faith. Worst of all, here was a man better at freely giving to what he believed in than I had ever been in all my years as a Christian. God had commanded me to give cheerfully, and my generosity was being upstaged by an atheist.

All dramatics aside, I think it’s important for us Christians to understand that tithing is a vital part of our faith. It teaches us not to put our faith in financial gain, it helps the Church support its leaders, and I think the act of giving helps us remain humble before God. He did not instruct tithing to rob us of our wealth; he commanded it so that the Church could provide for one another in times of need. Remember the words of Proverbs 11:24,

“One gives freely, yet grows all the richer; another withholds what he should give, and only suffers want.”

Deuteronomy 7:2 (NIV) 2and when the LORD your God has delivered them over to you and you have defeated them, then you must destroy them totally. Make no treaty with them, and show them no mercy.

Many people stumble at this portion of Scripture. It is amazing how modern “science” justifies the brutality of some cultures and condemns Christian history as un-Christian. If a culture is faithful to its beliefs, though those beliefs slaughter innocents and destroy indiscriminately, we are told we just don’t understand their culture. But when power mongers live in disregard to Christian principles, yet operate in the name of Christ, it is condemned as Christianity’s dark side.

Look at any culture today that does not have a Christian heritage and ask yourself if you would honestly want to live there. Yet, few educators will acknowledge the wonderful blessing faith in Christ has brought to the world.

The passage today is often cited as an example of the brutality of the Old Testament God. What is ignored is that the Children of Israel were in Egypt 400 years while the cup of iniquity of these people was filling up. They had the truth during the time of Melchizedek, at the beginning of that 400 year period, but they turned from it and became increasingly wicked. By the time Israel entered the land, the people there were slaughtering babies by the thousands to Moleck, burning them alive. (12:31) The other god they worshipped, Baal, included self-mutilation and perverse sexual practices in public worship. When cultures become that evil, life becomes unbearable and filled with misery and disease. It was God’s mercy to command (and only the Creator has the right to) that those cultures be wiped out. They were influencing the world for evil, and God was replacing them with Israel to influence the world for good.

“The blood shall be a sign for you, on the houses where you are. And when I see the blood, I will pass over you, and no plague will befall you to destroy you, when I strike the land of Egypt.” – Exodus 12:13 ESV

As a final step in the liberation of His people, God warned that He would strike down all the firstborn males – human and animal – in Egypt. But He also offered protection to the Israelites. An angel would pass by homes with blood on the doorpost, as long as this was blood from a one-year-old male lamb “without blemish” (v. 5).

This protection was provided for the Jews and also for anyone who agreed to His conditions (v. 48). God kept His Word. At midnight, all the firstborn males were killed except in the houses protected by the blood.

This became the foundation for the Passover feast. It was to be “a memorial day,” a “feast to the Lord” to be kept throughout all generations (v. 14). And it was to be a sign, a day to remember how God had delivered them and set them free (Exodus 13:3).

These Passover principles still are true for believers. The Bible tells us that Jesus is “the Lamb of God, for He takes away the sin of the world” (John 1:29). Just like the lamb of the Passover, Jesus’ blood provides deliverance, protection, and freedom. His blood “cleanses us from all sin” (1 John 1:7).

Passover begins at sundown today. Make this a season of reflection, to remember all God has done for you. Be sure you are protected by the blood of Jesus and that your sins have been forgiven.