In a Hurry and Running Late 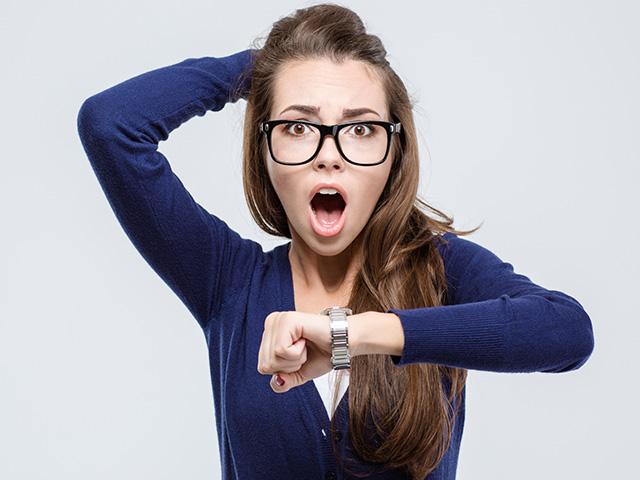 As a newlywed attending a Christian college in Southern California, I was a driver for a private mail and parcel service. Every day, I was in posh high-rise office buildings and run-down strip malls, machine shops and Mom-and-Pop shops. By the time I worked there for a year, I’d been in almost every post office in Orange County.

One day, my boss asked me to come in early because we had a new corporate client in Newport Beach who requested an early pick-up and delivery. Before heading out, I checked my map. Traffic was heavy. I was in a hurry and running late.

When I got to the post office, I turned into the drive, only to discover that I was in a long, narrow, one-way exit lane with a big red sign announcing DO NOT ENTER. The situation demanded a fast decision. Do I back up into traffic and go around the block, looking for the entrance? Or do I step on the gas and zip into the parking lot before anyone tries to exit? I pressed the pedal to the metal.

When I was almost out of the wrong-way lane, a car turned into the driveway. We both slammed on the brakes, barely avoiding a head-on collision. A bit shaken by the near-miss, I pulled up to the loading dock and put my mail onto a cart. But before I walked into the rear door of the post office, that same car sped around the building and screeched to a halt. Dressed in an expensive business suit, the driver got out and stomped towards me.

Instantly, Matthew 5:25 came to mind, “Make peace with your adversary while you’re still on your way.”

As the stranger approached, I walked up to him and said. “Sir, I owe you an apology. In a hurry, I drove into the exit. I was wrong, and would like to ask for your forgiveness.”

“No, sir. I just know that what I did was wrong. I nearly caused an accident, and I am sorry.”

“I am the postmaster,” his face a deep red by now. “I could ban you from every post office in the county. I could have the police ticket you for driving the wrong way. I could call your boss and have you fired.” When he paused, we stared nose to nose. “But tell you what. Because you admitted your wrongdoing without even knowing who I was, I will forgive you. Don’t let it happen again.”

I stood there stunned. If the Holy Spirit didn’t bring that verse to my mind at that instant, I would be in big trouble. If I let pride keep me from admitting my mistake, I might be unemployed by the end of the day.

It dawned on me that I really can trust the Scripture when it says, “don’t worry about how to defend yourself, for the Holy Spirit will tell you what to say” (Matthew 10:19-20, paraphrased). I had memorized those verses long before that morning, never realizing that I’d need to use them in a tight situation. Before driving away, I took a minute to thank the Lord for His Word and His Spirit.

After completing my route, I parked the van and took the keys to the office. While I filled out the timesheet, my boss walked in and said, “Hey, just wanted to let you know that the Newport Beach postmaster called to tell me he met you this morning.”

“He said he was really impressed with you, and that you do good work. I Just wanted to pass that compliment on. Good job.”

Embarrassed, humbled, and relieved, I drove to the college. I was in a hurry and running late, barely getting there in time for class, but careful to obey every traffic sign.

Genesis 2:18 18The LORD God said, “It is not good for the man to be alone. I will make a helper suitable for him.”

Man was not meant to be a hermit. A solitary condition is not good. God designed Eve as a helper suitable for Adam. That is God’s plan and God’s intention for women. I can hear the howls of derision from those with secular minds. The helper will be a team member not a slave. What they accomplish together is their accomplishment and not his alone. He must share the glory with his helper. In the upside down world of the Kingdom, the servant is the greatest. They need each other and are incomplete without each other.

The spiritual picture here is of Christ and the church. We were made new creatures from the blood that flowed from His side, just as Eve was made from the blood flowing from Adam’s side. We are to be His helper. That is why He calls us co-laborers. It is not as though He could not do it by Himself, but that He wants to include us in what He is doing. He wants to share His work with us for our benefit. It is not good for us to be alone. We need to be at His side, laboring with Him for His glory.

Genesis 2:24 For this reason a man will leave his father and mother and be united to his wife, and they will become one flesh.We are to be joined to Him so that all other attachments are a distant second. Does that describe your relationship with the groom, Christ Jesus? By His Spirit, are you a suitable helper for Him?

Prayer: Help me to be the helper You intend me to be as I yield to Your life in me.

Streams in the Desert – January 5

Remind God of His entire responsibility. “There is none beside thee to help.” The odds against Asa were enormous. There was a million of men in arms against him, besides three hundred chariots. It seemed impossible to hold his own against that vast multitude. There were no allies who would come to his help; his only hope, therefore, was in God.

It may be that your difficulties have been allowed to come to so alarming a pitch that you may be compelled to renounce all creature aid, to which in lesser trials you have had recourse, and cast yourself back on your Almighty Friend. Put God between yourself and the foe.

To Asa’s faith, Jehovah seemed to stand between the might of Zerah and himself, as one who had no strength. Nor was he mistaken. We are told that the Ethiopians were destroyed before the Lord and before His host, as though celestial combatants flung themselves against the foe in Israel’s behalf, and put the large host to rout, so that Israel had only to follow up and gather the spoil. Our God is Jehovah of hosts, who can summon unexpected reinforcements at any moment to aid His people. Believe that He is there between you and your difficulty, and what baffles you will flee before Him, as clouds before the gale.
–F. B. Meyer

When nothing whereon to lean remains,
When strongholds crumble to dust;
When nothing is sure but that God still reigns,
That is just the time to trust.
‘Tis better to walk by faith than sight,
In this path of yours and mine;
And the pitch-black night, when there’s no outer light
Is the time for faith to shine.

Abraham believed God, and said to sight, “Stand back!” and to the laws of nature, “Hold your peace!” and to a misgiving heart, “Silence, thou lying tempter!” He believed God.
–Joseph Parker

Who is My Family?

He looked at those seated in a circle around him and said, “Here are my mother and my brothers!” — Mark 3:34

In the church I grew up in, we used to sing, “I’m so glad I’m a part of the family of God.” This song was special to me because our extended family lived more than 1,000 miles away, and we shared most of our life and ministry with our brothers and sisters (and uncles and aunts) in Christ.

In today’s Bible reading, we find Jesus sharing life and ministry with the people in his closest circle, the ones who believed in him and gave up everything to follow him. Together they were doing the will of God the Father. They were Jesus’ spiritual family.

The point of Jesus’ naming his followers as family was not to dismiss the importance of his biological relatives but to show that the connection with fellow believers was vitally important. God wills for his people to be in community, to strengthen one another in faith, to rejoice with those who rejoice and mourn with those who mourn (Romans 12:15). Our witness to the world as Christ-followers can be that we clearly “love one another” (John 13:35).

Sometimes our biological families disappoint, discourage, or dismiss us. But God calls us to a higher and wider network—to be the family of God to­gether. When we love and support one another, seeking to do God’s will and work together, we follow Jesus’ example of cherishing our spiritual brothers and sisters.

“Bring the whole tithe into the storehouse, that there may be food in my house. Test me in this,” says the Lord Almighty, “and see if I will not throw open the floodgates of heaven and pour out so much blessing that there will not be room enough to store it.”
Malachi 3:10
DailyVerses.net

But among you there must not be even a hint of sexual immorality, or of any kind of impurity, or of greed, because these are improper for God’s holy people.
Ephesians 5:3
DailyVerses.net

God is our refuge and strength, an ever-present help in trouble.
Psalm 46:1
DailyVerses.net