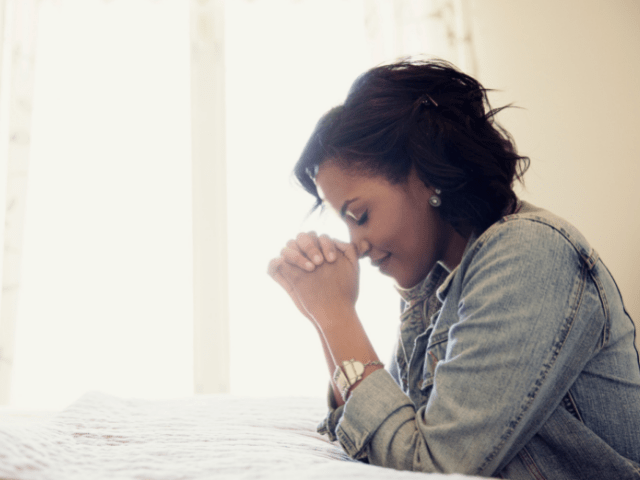 One night at my church, a lady approached me and said that she had a word from God for me. I quickly heard the voice of the Holy Spirit warning me, “Pray before she speaks!” and I prayed. Her words declared things about me that were far from true. At that moment, I felt very confused—because nothing she said made sense to me or to those who knew me best.

“If I were to testify on my own behalf, my testimony would not be valid. But someone else is also testifying about me, and I assure you that everything he says about me is true” (John 5:31-32).

The Holy Spirit had indeed warned me about this person who was speaking falsely. He knew that my identity in Himself would be confronted by the enemy, but I know that God knows me and confirms my acts done in faith. When we do things according to God’s will, our fruit speaks for itself (see Matthew 7:20).

At that moment, I remembered these words of Jesus,

“And the Father who sent me has testified about me himself. You have never heard his voice or seen him face to face” (John 5:37).

An intimate and genuine relationship with the Father will bear consistent spiritual fruit evident to others. We don’t have to accept someone who wants to speak—on God’s behalf or their own—into our lives just because they do it in a church setting. Someone who genuinely knows our character and maturity will not go where they are not invited.

Perhaps many people have tried to label you according to your past: lazy, a thief, good-for-nothing, liar, crazy, or even unfaithful. Your heavenly Father does not identify you according to what you’ve done. He is always waiting for you to turn back to Him and receive a new identity in Christ. It is important to know and discern what God says about you and hold steadfast to the truth of your genuine relationship with the Father. When needed, God can and does bring loving, humble correction through another; this will always be consistent with biblical truth.

In my daily work at CBN Guatemala, I have the privilege of praying for many people who are going through difficult situations. Others have gone through terrible things and have overcome them. Having a genuine relationship with the Father, and my identity grounded in Him, is my greatest strength to help and guide others.

The good news today and forever is that God loves you so much that He sent His only Son, Jesus, to die for you on a cross. God has faith in you and has plans for your life. Give your life to the Father today and you will see how false and degrading words toward you will come to nothing. You will see how the roads in the middle of the desert open up and you will see His hand move in your favor. God loves you simply because it pleases Him! And that is more than enough reason to love Him in return. Remember:

“For I know the plans I have for you,” says the Lord. “They are plans for good and not for disaster, to give you a future and a hope” (Jeremiah 29:11).

On the Third Day He Rose

Christ has indeed been raised from the dead, the firstfruits of those who have fallen asleep.

Why do we say that Jesus rose “on the third day”? Some people might argue that the number of days he lay in the grave would confirm that he had died. Others point out that this fulfills a prophecy about Jesus’ death (Matthew 16:21; 1 Corinthians 15:4). But the mention of “the third day” isn’t the main point of the creed’s declaration saying, “The third day he rose again from the dead.”

The main point is that at a specific moment in time Jesus rose again from the dead!

Jesus’ resurrection not only stands at the center of the Apostles’ Creed; it stands firmly at the center of the Bible’s teaching. Indeed, Christ’s ­resurrec­tion is the foundation on which our Christian faith rests. For, as the apostle Paul emphasizes, if Jesus didn’t rise from the dead, all who hope in him should be the most pitied of all people. For if Jesus didn’t rise, we are all still shackled by the chains of sin and doomed to death forever.

Alleluia! He is risen indeed!

Jesus, you rose from the grave in triumph over sin and death! We thank you and praise you! Now help us to live for you. In your name we pray. Amen.

Streams in the Desert – May 17

Your Crown of Glory

When James and John came to Christ with their mother, asking Him to give them the best place in the kingdom, He did not refuse their request, but told them it would be given to them if they could do His work, drink His cup, and be baptized with His baptism.

Do we want the competition? The greatest things are always hedged about by the hardest things, and we, too, shall find mountains and forests and chariots of iron. Hardship is the price of coronation. Triumphal arches are not woven out of rose blossoms and silken cords, but of hard blows and bloody scars. The very hardships that you are enduring in your life today are given by the Master for the explicit purpose of enabling you to win your crown.

Do not wait for some ideal situation, some romantic difficulty, some far-away emergency; but rise to meet the actual conditions which the Providence of God has placed around you today. Your crown of glory lies embedded in the very heart of these things–those hardships and trials that are pressing you this very hour, week and month of your life. The hardest things are not those that the world knows of. Down in your secret soul unseen and unknown by any but Jesus, there is a little trial that you would not dare to mention that is harder for you to bear than martyrdom.

There, beloved, lies your crown. God help you to overcome, and sometime wear it. –Selected

“It matters not how the battle goes,

The day how long;

Faint not! Fight on!

Christ—the power and wisdom of God

Christ is the power of God, for he is the Creator of all things, and by Him all things exist. But when he came to earth, took upon himself the fashion of a man, tabernacled in the inn, and slept in the manger, he still gave proof that he was the Son of God; not so much so when, as an infant of a span long, the immortal was the mortal, and the infinite became a babe; not so much so in his youth, but afterwards when he began his public ministry, he gave abundant proofs of his power and godhead. The winds hushed by his finger uplifted, the waves calmed by his voice, so that they became solid as marble beneath his tread; the tempest, cowering at his feet, as before a conqueror whom it knew and obeyed; these things, these stormy elements, the wind, the tempest, and the water, gave full proof of his abundant power. The lame man leaping, the deaf man hearing, the dumb man singing, the dead rising, these, again, were proofs that he was the “power of God.” When the voice of Jesus startled the shades of Hades, and rent the bonds of death, with “Lazarus come forth!” and when the carcase rotten in the tomb woke up to life, there was proof of his divine power and godhead. A thousand other proofs he afforded; but we need not stay to mention them to you who have Bibles in your houses, and who can read them every day. At last he yielded up his life, and was buried in the tomb. Not long, however, did he sleep; for he gave another proof of his divine power and godhead, when starting from his slumber, he affrighted the guards with the majesty of his grandeur, not being held by the bonds of death, they being like green twigs before our conquering Samson, who had meanwhile pulled up the gates of hell, and carried them on his shoulders far away.

For meditation: This very same power of God is mighty to save believers through the gospel (Romans 1:16), is at work within them (Ephesians 1:19) and can enable them to fight the good fight of the faith against all evil powers (Ephesians 6:10-13).

Good will come to those who are generous and lend freely, who conduct their affairs with justice.
Psalm 112:5
DailyVerses.net

Therefore encourage one another and build each other up, just as in fact you are doing.
1 Thessalonians 5:11
DailyVerses.net