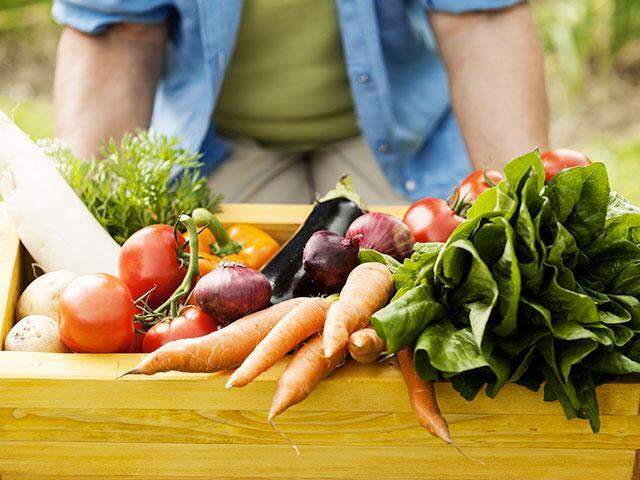 “My food,” said Jesus, “is to do the will of him who sent me and to finish his work. Don’t you have a saying, ‘It’s still four months until harvest’? I tell you, open your eyes and look at the fields! They are ripe for harvest” John 4:34-35).

As I stepped outside one morning, the crisp coolness of fall greeted me. Usually, I turn on the light next to the door to avoid falling down the steps, but this morning the deck was already awash with light, although it was still hours until sunrise. As I walked to the end of the driveway, I saw the light source—a harvest moon.

God is in the details of our lives. He designed the moon to provide extra light in the fall to accommodate the harvesting of crops. Extra workers are hired and once all the crops are gathered, there is usually a celebration for the completion of work and God’s bounty.

Jesus often taught using stories that reflected the occupations of the time and farming illustrations abound in Scripture. He used planting and harvesting to illustrate spreading the gospel and drawing in and nurturing those who believed. In Matthew 9, Jesus reminded the disciples of the need for more harvesters.

Then he said to his disciples, “The harvest is plentiful but the workers are few. Ask the Lord of the harvest, therefore, to send out workers into his harvest field” (Matthew 9:37-38).

Now, more than ever, there is a need for workers who are willing to sow and harvest in spiritual fields. But why is it so hard to share our faith in Christ?

Fear—I walked the same route a man in my neighborhood ran. Eventually, his steps slowed to a stumble. Then he began working out on gym equipment in his garage. We continued to wave, but the Holy Spirit nudged me to walk up his driveway and tell him about Jesus. I invented excuses: time constraints, invasion of his privacy, not really knowing him. Sometimes, I even walked a different route, avoiding his house and my guilt for not stopping. Then, one day when I passed the house, cars jammed the driveway and spilled into the street. A grim black wreath hung on the front door. The man was dead and I had allowed fear to keep me from acting in obedience to God’s voice.

Feeling inadequate—Satan steals confidence, convincing us we’re not smart enough, engaging enough, wise enough, whatever enough to act on God’s directives. God gave Moses an assignment and he immediately reminded God he was inadequate. Even after God promised to help him, Moses still refused. Needless to say, God was angry. God is disappointed when we don’t trust him enough to step out in faith or when we don’t listen when he instructs us.

Invasion of privacy. The world bombards us with the message that people have the right to diverse spiritual beliefs and we are wrong to force our message or risk offending by implying their beliefs aren’t correct. But relaying your personal story about God at work in your life isn’t forcing someone to accept Him. Your personal experience is your story and others may identify and come to know Christ because you were willing to tell it.

Expecting another messenger—Often, we hesitate to share our faith because we assume someone else will. But what if others are waiting for another messenger, too? God showed me that sharing my faith is a natural overflow of my love for him. When we’re excited about something in our lives, we usually don’t wait for someone else to spread our good news.

Paul said, “For I am not ashamed of the gospel, because it is the power of God that brings salvation to everyone who believes” (Romans 1:16).

Look around you. Your ripe fields awaiting harvest may be as close as a co-worker, neighbor, or longtime friend. So roll up your sleeves, go to work, and enjoy a bountiful harvest.

Jesus Forgives and Calls Us Forward

“Therefore, if anyone is in Christ, he is a new creation; old things have passed away; behold, all things have become new.”  2 Corinthians 5:17

In John 21 we read the story of when Jesus appeared to the seven disciples early one morning. It was just days after the Resurrection. They were out fishing, and hadn’t caught a thing. Though they didn’t recognize Him, He called to them from the shore, “Throw your net on the right side of the boat and you will find some.” v. 6

And a miracle happened. They caught fish. So many in fact, that they were “unable to haul the net in because of the large number…”

Our God of miracles.

That’s when Peter recognized Him.

But here’s what I love too. Jesus had gone before them, He’d already prepared a fire with fish and bread for them. He’d been there waiting. He invited them to bring some of their fish and then, to “come and have breakfast.” v. 10-12

And over a fire and some food, He had a heart to heart with Peter. Three times he asked Peter if he really “loved” Him, the kind of self-sacrificing love that was willing to give all. The kind of love that involved deep faithfulness, commitment, strong character, and active expression.

Peter, who Jesus had previously called a “rock.” Peter, who had claimed he would never deny Christ, yet denied him three times in the courtyard before his journey to the cross. Peter, who was impulsive or fearful at times, yet strong and bold at other times. Peter, who was probably not feeling like much a “rock” that morning as he sat with Jesus.

Defeated. Guilt-ridden. Sense of failure hanging over. Maybe still rehearsing what he’d done, and beating himself up for it. Living under the weight of the “what if’s.”

And here he was again by a fire, possibly a reminder of the very fire that he’d warmed himself over when he had denied Christ. Yet this time, Jesus had pulled up a seat. He sat with him, ate with him, talked with him, and got right to the heart of it all.

Three times Peter had denied him. Three times Jesus asked Peter of his love and re-commissioned him into a life of service and purpose.

He gave him a mission.

He called him to follow, serve, love, tend to, and care for believers.

He brought to him a renewed purpose and vision, in the midst of deep regret, guilt, and shame.

Deeper purpose and calling to press on, leaving the past behind, and walking stronger in what was still to come.

This is who our God is. The One who is Mighty in miracles, and loving, forgiving and kind. The One who waits for us and speaks to our hearts, who gives us a calling, and never allows our defeat and failures to have the final word in this life.

No matter what we’ve walked through, or where we find ourselves today, be assured that He is Able. He can turn around every wrong road we’ve taken, and get us back on course, stronger than before. He can use every failure or defeat, and turn it around for good somehow. Because that’s just how He works.

Streams in the Desert – April 9

All things work together for good to them that love God (Rom. 8:28).

Many people are wanting power. Now how is power produced? The other day we passed the great works where the trolley engines are supplied with electricity. We heard the hum and roar of the countless wheels, and we asked our friend, “How do they make the power?”

“Why,” he said, “just by the revolution of those wheels and the friction they produce. The rubbing creates the electric current.”

And so, when God wants to bring more power into your life, He brings more pressure. He is generating spiritual force by hard rubbing. Some do not like it and try to run away from the pressure, instead of getting the power and using it to rise above the painful causes.

Opposition is essential to a true equilibrium of forces. The centripetal and centrifugal forces acting in opposition to each other keep our planet in her orbit. The one propelling, and the other repelling, so act and re-act, that instead of sweeping off into space in a pathway of desolation, she pursues her even orbit around her solar centre.

So God guides our lives. It is not enough to have an impelling force–we need just as much a repelling force, and so He holds us back by the testing ordeals of life, by the pressure of temptation and trial, by the things that seem against us, but really are furthering our way and establishing our goings.

Let us thank Him for both, let us take the weights as well as the wings, and thus divinely impelled, let us press on with faith and patience in our high and heavenly calling.
–A. B. Simpson

“If anyone sins because they do not speak up when they hear a public charge to testify regarding something they have seen or learned about, they will be held responsible.” – Leviticus 5:1 NIV

It can happen at any place or at any time. We might witness a crime or just see something being said or done that is wrong. How do we respond? We can be tempted to do nothing and stay silent, not wanting to get involved.

But the Bible teaches the principle of personal responsibility. God holds us accountable for our actions even when we are just observers. Jesus illustrated this principle by telling the parable of the Good Samaritan (Luke 10:30-37). In this story, three men encountered a man who had been “attacked by robbers,” stripped of his clothes, beaten, and left “half dead” (v. 30).

All three men had an opportunity to act. The first, a priest, saw the man but “passed by on the other side” (Luke 10:32). The second, a Levite, saw the man, but he, too, ignored him. Finally, a Samaritan took pity and helped him. He took the time and trouble to bandage the man’s wounds and then brought him to an inn. He paid the bill and made sure he was cared for. His actions cost him something, but he had done the right thing.

This Samaritan could not remain silent or do nothing. Jesus told this parable to give us an example of how we should act. We should not be detached or indifferent but care, be prepared to speak up, do the right thing, get involved, and “go and do likewise” (Luke 10:37).

All my longings lie open before you, Lord; my sighing is not hidden from you.
Psalm 38:9
DailyVerses.net