Life Is Full of Detours 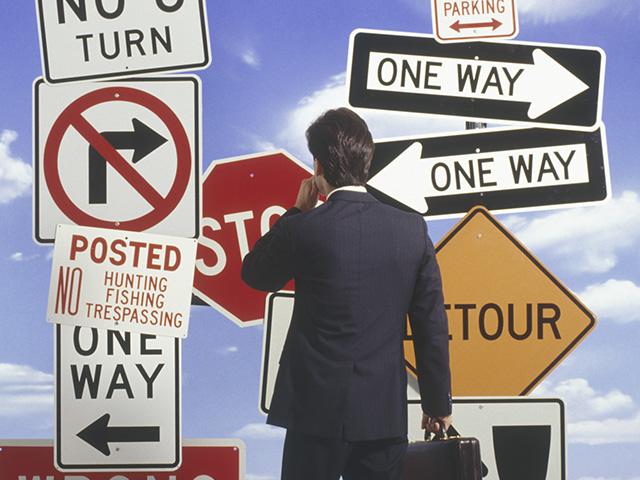 If there is one Bible verse that really bugs me, it is Genesis 12:1 when God says to Abraham, “Go … to the land I will show you” (Genesis 12:1 ESV). Not only does it poke at my need for control, but I get lost … a lot. The Bible teaches that God determines the time and place that each of us is born (Acts 17:26); I sometimes wonder if God waited until the invention of GPS before sending me into the world.

Nevertheless, there are times when a detour is actually a part of God’s plan. Take Abraham and Sarah, for example. When God asked Abraham to leave his homeland, Abraham and Sarah packed up their little family and began the journey. However, just as they were starting to make some headway, a famine struck and the couple suddenly found themselves detouring into Egypt. But the curious thing is that when they left, Scripture says that they traveled right back to where they started.

Abraham did not gain a single inch of ground. So what was this detour all about? Well, a few chapters later, we are introduced to Sarah’s Egyptian slave named Hagar. Could it be that God was watching over Hagar and that He decided to remove her from Egypt and its pagan gods? Did God Himself have His eye on Hagar, desiring to bring her out and introduce her to Himself?

What if God orchestrated this little detour into Egypt, not because He needed to send Abraham and Sarah in, but because He desired to bring Hagar out? After all, God could have prevented the famine; He could have rained down manna from Heaven. But with God, everything has a purpose – even the detours. Even the difficulties. Even the desert roads.

Later, when Abraham and Sarah’s misguided schemes to conceive a child distress Hagar to the point that she flees into the wilderness, it is God Who pursues her; it is God Who meets her there.

Ever been in a wilderness? I have. At the time, we may only see dust and despair beneath our feet. To our right, we see a wasteland …to the left, only emptiness. But if we look up, we will find God has been there all along, watching, waiting.

Why? Because only in the wilderness can we come to recognize our complete dependence on Him. Maybe that’s why God allows us to go there. To reach the point where our hearts cry out to Heaven, “God, do You see me?”

Oh yes, dear one. He sees you.

And it is there – on the desert road – where we get our first glimpse into the amazing plan God has for her life.

How about you? What if God wants to use the desert roads—the detours, the struggles, the heartaches and tears—to form and fashion you for His great purposes? Will you trust Him? Even in the detours?

“Go … to the land I will show you …” (Genesis 12:1 ESV) But don’t be surprised if you encounter some detours along the way.

“Behold, I am doing a new thing; now it springs forth, do you not perceive it? I will make a way in the wilderness and rivers in the desert.” (Isaiah 43:19 ESV)

Whoever wants to become great among you must be your servant, and whoever wants to be first must be slave of all. For even the Son of Man did not come to be served, but to serve, and to give his life as a ransom for many.” – Mark 10:43-45

Sometimes, I get restless. I went to college at Taylor University, a small Christian school in the middle of Cornfield, Indiana. Though Taylor wasn’t very big, it strove to serve Christ, and encouraged its students to impact the world for God. During the January term, when you could sleep all day and goof-off all night, Taylor offered something called Lighthouse Missions. Instead of wasting their brief vacation, students became a part of service-learning projects that allowed them to share Christ with a world in need.

When Spring Break came around, and the beaches of Florida were calling, it sent students everywhere from Russia to the neighboring town of Grant County, where they engaged in housing projects, orphan care, and outreach. It was tough giving up those precious vacation days, but it felt good to know you were serving Christ. Unfortunately, after graduation opportunities like these are harder to come by. With a forty to fifty-hour work week, not to mention budgeted money and vacation time, jetting off to some foreign location isn’t something you can just do.

I can remember sitting in church, boiling with frustration because I couldn’t just go do something like I had in college. God clearly has a sense of irony, because at that moment the pastor stood up and asked for volunteers to help pack up after the service. My problem? I had become the “wealthy giver.” Not sure what I mean? Read this story in Mark 12:

Jesus sat down opposite the place where the offerings were put and watched the crowd putting their money into the temple treasury. Many rich people threw in large amounts. But a poor widow came and put in two very small copper coins, worth only a fraction of a penny. Calling his disciples to him, Jesus said, “I tell you the truth, this poor widow has put more into the treasury than all the others. They all gave out of their wealth; but she, out of her poverty, put in everything–all she had to live on.” – Mark 12:41-44

It’s amazing how serving Christ can easily become something selfish. I was only interested in serving if it was on my terms, and because of that, I let a lot of opportunities pass me by. The truth is that volunteering for a church nursery could be just as important in God’s eyes as building houses in another country.

An old professor once told my class that the kingdom of God is built on willing hearts. When we choose to follow God, we are laying the bricks of his kingdom, and creating a sturdy foundation for others to stand on. So get involved, and if you feel God leading you toward a big opportunity, take it. But don’t be too proud to serve in the small places. Sometimes it’s the little things that make all the difference.

Remember the case of John Newton, the great and mighty preacher of St. Mary, Woolnoth,—an instance of the power of God to change the heart, as well as to give peace when the heart is changed. Ah! dear hearers, I often think within myself, “This is the greatest proof of the Saviour’s power.” Let another doctrine be preached: will it do the same? If it will, why not let every man gather a crowd round him and preach it? Will it really do it? If it will, then the blood of men’s souls must rest upon the man who does not boldly proclaim it. If he believes his gospel does save souls, how does he account for it that he stands in his pulpit from the first of January till the last of December, and never hears of a harlot made honest, nor of a drunkard reclaimed? Why? For this reason, that it is a poor dilution of Christianity. It is something like it, but it is not the bold, broad Christianity of the Bible; it is not the full gospel of the blessed God, for that has power to save. But if they do believe that theirs is the gospel, let them come out to preach it, and let them strive with all their might to win souls from sin, which is rife enough, God knows. We say again, that we have proof positive in cases even here before us, that Christ is mighty to save even the worst of men—to turn them from follies in which they have too long indulged, and we believe that the same gospel preached elsewhere would produce the same results. The best proof you can ever have of God’s being mighty to save, dear hearers, is that he saved you.

Do not be deceived: God cannot be mocked. A man reaps what he sows.
Galatians 6:7
DailyVerses.net

And if you do good to those who are good to you, what credit is that to you? Even sinners do that.
Luke 6:33
DailyVerses.net