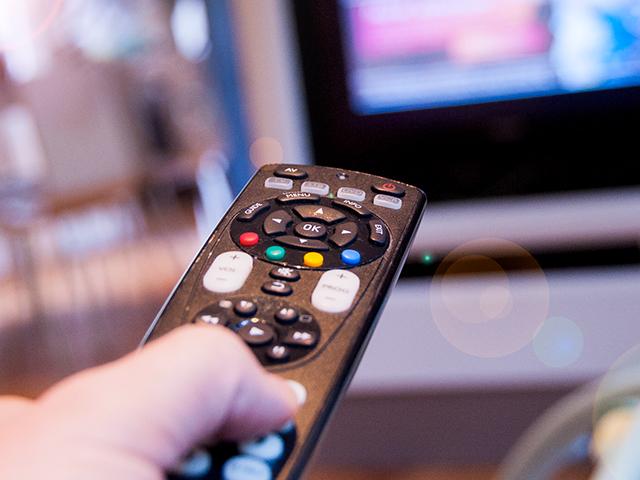 This remote control nearly takes my breath away. Complicated. That’s the only word I can think of when I look at it. Sixty-two buttons. And four of the buttons are color codes, which, in various combinations with other buttons, vastly increases the possible functions. A killer remote. That’s what this is. It will wreak havoc on the brain functions of the poor soul who tries to make sense of the whole thing. On the other hand, some people would probably love it because it does so much.

Simple. This remote inspires me to long for more simplicity in life—both mine and the world I live in. Simplicity of less stuff and less busyness, of focus on what’s important, and of the freedom that follows.

A key factor in pursuing and maintaining simplicity is my values and calling. They give me clarity in every area of life on what’s most important and what’s secondary.

Jesus did this his entire time on earth. When word spread that he was a miracle man, and crowds came to receive a touch from God, he got up and left. Left! He walked away and said,

“I must announce the good news of God’s kingdom to the other towns also. That is why I was sent” (Luke 4:43 NIRV).

He could have done a gazillion things, but he focused on why he was here.

And when he visited Martha and Mary’s house, Martha was living the complicated life and doing all the work needed to serve the meal, and I appreciate Martha. It would have been a miserable supper without her. But Mary sat at Jesus’ feet and focused in simple attention to what was most important (Luke 10:38–42).

Jesus said, “… only one thing is needed. Mary has chosen what is better. And it will not be taken away from her” (Luke 10:42 NIRV).

Many things are good but not needed. Mary’s focused hunger for God put everything else in its proper secondary place in a life of blessed simplicity.

What is that worth to you?

Deuteronomy 7:7-8 (NIV) 7The LORD did not set his affection on you and choose you because you were more numerous than other peoples, for you were the fewest of all peoples. 8But it was because the LORD loved you and kept the oath he swore to your forefathers that he brought you out with a mighty hand and redeemed you from the land of slavery, from the power of Pharaoh king of Egypt.

Why does the LORD set His love on certain ones? In the case of Israel, we see that He simply chose to love them, and it was in keeping with the oath He made to their forefathers. That oath began with the man of faith, Abraham. Our relationship with God can affect future generations that follow us.

God chose to love the world. He set His love upon the world because of what Jesus did. The result of Jesus’ life of faith is the same type, but it is the ultimate fulfillment of the shadow in Abraham. We, too, were delivered from the land of slavery, slavery to our old nature. We, too, are delivered from the master of this world, Satan. He no longer has a claim to our lives. He has no right to our souls. God made a promise to crush the head of Satan so that we could be redeemed and out from under the power of the enemy.

Consider: You are delivered from the power of the enemy. Don’t let him tell you anything else. You are loved, and you are free!

Streams in the Desert – March 28

And it shall come to pass, as soon as the soles of the feet of the priests that bear the ark of the Lord, the Lord of all the earth, shall rest in the waters of Jordan, that the waters of Jordan shall be cut off from the waters that come down from above; and they shall stand upon a heap. (Joshua 3:13).

Brave Levites! Who can help admiring them, to carry the Ark right into the stream; for the waters were not divided till their feet dipped in the water (ver. 15). God had not promised aught else.

God honors faith. “Obstinate faith,” that the PROMISE sees and “looks to that alone.” You can fancy how the people would watch these holy men march on, and some of the bystanders would be saying, “You would not catch me running that risk! Why, man, the ark will be carried away!” Not so; “the priests stood firm on dry ground.” We must not overlook the fact that faith on our part helps God to carry out His plans. “Come up to the help of the Lord.”

The Ark had staves for the shoulders. Even the Ark did not move of itself; it was carried. When God is the architect, men are the masons and laborers. Faith assists God. It can stop the mouth of lions and quench the violence of fire. It yet honors God, and God honors it.

Oh, for this faith that will go on, leaving God to fulfill His promise when He sees fit! Fellow Levites, let us shoulder our load, and do not let us look as if we were carrying God’s coffin. It is the Ark of the living God! Sing as you march towards the flood!
–Thomas Champness

One of the special marks of the Holy Ghost in the Apostolic Church was the spirit of boldness. One of the most essential qualities of the faith that is to attempt great things for God, and expect great things from God, is holy audacity. Where we are dealing with a supernatural Being, and taking from Him things that are humanly impossible, it is easier to take much than little; it is easier to stand in a place of audacious trust than in a place of cautious, timid clinging to the shore.

Let us, today, attempt great things for God; take His faith and believe for them and His strength to accomplish them.
–Days of Heaven upon Earth

“When the large crowd … heard that Jesus was coming to Jerusalem, they took the branches of the palm trees … and began shouting, ‘Hosanna! Blessed is He Who comes in the Name of the Lord.’” – John 12:12-13 NASB

Eager with anticipation, the crowds greeted Jesus as He approached Jerusalem, shouting loud praises! He had done amazing things, most recently raising Lazarus from the dead. This was a moment of celebration. It could have seemed like a great triumph for Jesus. But He understood what really was taking place and what really was important.

During the feast that would be taking place in Jerusalem, Jesus was approached by some Greeks. His words might have surprised them. He did not talk like a conqueror or king. He did not speak about power, overthrowing Roman rule, or building a movement. Instead, He spoke about being a servant. Instead of talking about life, He talked about death.

He had committed everything to doing the Father’s will and completing His work – even if this meant death. If these Greeks wanted to bear much fruit, they, too, needed to commit everything to serve God. They needed to obey Him without reservation, no matter the cost and to understand that He honors servants and rewards those who give up everything to serve Him.

We are reminded of these truths today, on this Palm Sunday. This day reminds us of the importance of praising Jesus and committing everything to follow Him. Always seek first God’s Kingdom. Be a servant. Focus on serving God. Fill your life with praise and worship. Seek to be a living sacrifice, pleasing to Him.

I have set my rainbow in the clouds, and it will be the sign of the covenant between me and the earth.
Genesis 9:13
DailyVerses.net