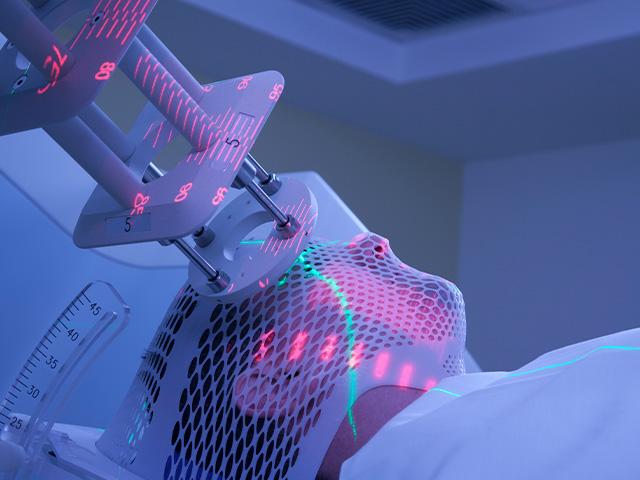 When I asked Jim about his cancer, a contented, peaceful smile formed on his face. “So far. So good. No recurrence. The doctor says the cancer in my tongue has disappeared.”

Jim hesitated before changing gears. “I’ve never felt God’s presence like I did when on the radiation table.”

He scratched his head. “I’m claustrophobic and I get anxious when I feel trapped. When you have radiation, they strap you to a table.”

He stared past me into the memories he was reliving. “They fastened me in place, covered my face with a plastic mask and bolted me to the table. The techs would leave and seal the door. I was alone, unable to move, feeling like a prisoner. I would hear a click followed by a dull, metallic sound. That’s when I knew the radiation started.”

Jim grabbed his wife’s hand and then continued. “I got through it because my wife recorded some praise tapes. With my worship music cranking on my phone, all I could do was pray and get lost in the music. When I did, the strangest thing happened.”

Wiping a tear from his eye, he said. “I heard the most beautiful voice, singing right beside me. I couldn’t see him through my mask, but I knew God sent an angel to watch over me.”

Trapped by Our Trials?

Sometimes we feel like Jim, confined by our circumstances. Physical afflictions, financial pressures, and strained relationships trap us in a corner. Our discouraged minds tell us we are helpless, alone and forgotten. Doubt clouds our thinking. We wonder if God — or anyone – cares.

When we experience these emotions, we should follow Jim’s example. He refused to be victimized by his circumstances. He did the one thing he could do – respond in faith. He prayed, worshiped, and drew upon God’s grace. When he did, God’s presence became tangible. An angel worshiped with him singing their victory through the dull humming sounds of the radiation.

When our difficulties restrain us, we can always give praise. We can express God’s faithfulness, love, and adequacy. We can remind ourselves how God controls every detail of our lives, how He provides for our needs and how His love never gives up on us.

Jim learned how to bring God’s presence into his adversity. The only thing Jim could do, while trapped on the table, was use his secret weapon. Worship.

In the Bible, we read about Paul and Silas incarcerated in a Philippian jail. When they offered up their praises, God freed them from their chains. But God doesn’t always deliver us from our troubles. Sometimes, He brings us through adversity.

In another story, three men — Shadrach, Meshach, and Abednego – were shackled with ropes and thrown into a fiery furnace. They honored God instead of bowing before an idol. In the fire, the Lord showed up — in person. He preserved their lives and released them from their shackles. Through their trial, God changed them.

Prayer and praise helped Paul and Silas, the three men in the fire, and my friend Jim. No matter how pinned down we feel, we are not trapped by our circumstances. We can respond to His promises, approach His throne, and break free. We can pray, worship, and invite the One who inhabits our praises into our adversity.

“Let us then approach God’s throne of grace with confidence, so that we may receive mercy and find grace to help us in our time of need.” Hebrews 4:16 (NIV).

Suffering. It’s not standard daily devotional fare, because let’s face it, usually we want to begin or end our day being uplifted, or even better, lifting up God, rather than focusing on our pains and problems.

But there’s the rub… we all have pains and problems. Christian and non-Christian. Lifelong disciple and baby believer. Red and yellow, black and white. Everyone, from the moment he or she was born, has struggled, tried, failed, hurt, sinned, misunderstood, and reacted. Humanity shares a true brotherhood over suffering, one that we might understand a lot better if suffering weren’t also so relative. By which I mean, one person’s issues may sound simple, easy-to-solve, even petty to another. “That’s nothing compared to what I’ve had to endure!”

But the fact is, your sorrows and difficulties are real to you. It’s one reason why I’m no fan of when people say a certain place or time in their lives isn’t “the real world,” as if the spot they are currently tucked away at is immune from any degree of difficulty.

Suffering is very real, and there’s certainly no reason any Christian would expect life to be otherwise. We purport to follow a “Suffering Savior.” His stripes have healed us, and wow do we seem to feel them sometimes, which is as it should be, as we deserved them instead of Him. If we agree that no person but One – no matter where they lived or how easy or hard they had it – has escaped sin’s corruption, then how much more must we agree that truly NO person has escaped suffering?

Look at what Peter suggests in today’s verse: you can suffer for doing good, or you can suffer for doing bad. By extension, some of the problems in your life may be a result of your own rebellious choices, while other hurts may naturally result from walking so closely with Christ that you ache at the injustice and hardship around you, with the world despising and persecuting you.

In the classic allegory Hinds’ Feet on High Places, Much-Afraid journeys with companions named Sorrow and Suffering, and these two assist her in her climb up the Injury Precipice, which is a part of her transformation into “Grace and Glory.”

The same is true for you. Your sufferings have informed you, educated you, helped you along in your journey. You may despise them, but they are yours. And they will be with you whether you are doing right, or not. Of course, the nature of them will be quite different.

There may yet be one way, though, to avoid suffering. There’s a third option, left out here by Peter, but not left out by John in the Revelation. It’s the middling, lukewarm response to life, the do-nothing approach. This is the approach that cocoons itself off from life and all of its pain (but also all of its involvement). And make no mistake, “Life is pain, Highness. Anyone who says differently is selling something,” says that famous theologian the Man in Black in The Princess Bride.

You may not feel anything from inside a cocoon; in fact, it may be an abundance of pain and suffering that forced you in there. But remember, no creature that cocoons itself is intended to stay locked up forever. The point is to be rested, healed, matured, transformed. To become more beautiful, useful. Even the emerging process itself carries a degree of struggle, but one that, if the insect did not go through unhindered, would leave it too weak to fly.

So be lifted up in your suffering today

It is a companion.

It is designed to transform you.

It gives you a share in the inheritance of Christ and the brotherhood of humanity.

Genesis 6:18 (NIV) 18But I will establish my covenant with you, and you will enter the ark–you and your sons and your wife and your sons’ wives with you.

The ark is a type of Christ. Judgment was about to end the misery man was inflicting upon himself, but God was going to make a way to spare some from that judgment. There is only one door in the ark, (vs16) just as there is only one Door through which we can enter to escape God’s judgment. (John 10) There is no other provision made for escaping the wrath of God that was about to come upon the earth. In the ark, the only direction to look out was up. The window was in the top. In Christ we look out on the world with an upward look. Once Noah, his family, and the animals had entered, “Then the LORD shut him in”. Genesis 7:16b The Lord Himself seals us into the new life with His Spirit. He confirms His covenant (promise) with us. The promise Adam and Eve had heard, that there would be One that would crush the head of Satan, then ran through the lineage of Noah. God has provided an ark for all who will place their faith in Him, Jesus Christ.

Noah’s entire family entered the ark, just as the Philippian jailer’s family did. (Acts 16:34) Are you and your family safely sealed in the ark? Have you entered into the New Covenant in Jesus’ blood so that He will be your ark that bears the brunt of the judgment of God while you are safe in Him? The storm will come, and the whole earth will be purged. Those in Him will step out into a new world, purged of violence and sin. The promise is for you and your children. Enter in today!

Prayer: Thank You Jesus for being an ark for me, for bearing the brunt of God’s righteous judgment on sin.

“Therefore now, O Lord, please take my life from me, for death is better to me than life.” – Jonah 4:3 NASB

When he heard what God planned, Jonah resisted and ran away. But God brought him back through the belly of a great fish. Humbled, he emerged ready to obey and faithfully went to proclaim coming judgment to Nineveh – unless they repented.

Then, something amazing happened! The people actually heeded Jonah’s warning and repented – even the king. As a demonstration of His amazing mercy, God did not send judgment. Instead, there was a revival!

We might assume Jonah would have been pleased. Because of his ministry, thousands had responded and turned to God. But Jonah was not prepared for this outcome. He seemed puzzled and angry, feeling that God had made him appear foolish.

Jonah had followed God’s direction to preach in Nineveh, but he remained primarily concerned about his personal reputation. It seems he would have been more pleased if the judgment had come as he had prophesied.

His reaction reminds us of how easily we can develop our own interpretations. Even when we think we are serving God, we sometimes are dominated by our own desires.

Jonah’s story is a reminder that we always need to submit our ways to God and seek to do His will. We should acknowledge Him, confident that He will direct our path.

Commit your life anew to God. Submit everything to Him. Seek to be faithful to His call and follow His plans, wherever they might lead. Trust Him!