Sow the Seeds Where You Are 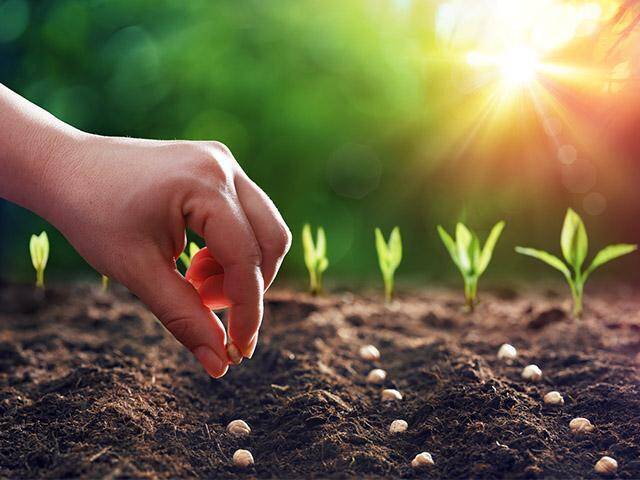 Hudson Taylor, the famous missionary credited with opening China to the gospel, said of his labors, “I have found that there are three stages in every great work of God: first, it is impossible, then it is difficult, then it is done.” Hudson Taylor worked for many years before the people of the Orient were open to hearing about Jesus. Some say he was a special man who accomplished a special work. He spread the seed of God’s word to any who would listen. He trusted God to cause the seed to spring up in each hearer’s heart.

When I heard Hudson Taylor’s story, I thought, “I could never be a missionary.” I was so sure God would call me to another country where I would have to learn a new language and deal with some difficult situations and hardships. But I soon learned the call to His missionary work is not left to a few chosen men and women. Jesus calls us all.

Before Jesus ascended back to heaven, He said,

“Go ye into all the world and preach the gospel to every creature” Mark 16:15 (KJV).

His call to action may never lead you to some faraway land. Your mission field may be within the four walls of your home. Or on your job. Or in the supermarket. Or to the couple next door. Our commission is to tell our sons and daughters, husbands, co-workers and neighbors all the great things Christ has done for us.

We have been given the amazing task of sharing the Good News that Jesus, God’s own son, died for our sins, was buried and rose again on the third day so that we could be forgiven and receive newness of life. Hurting, lonely, and sin-sick people all around us need to hear God’s message of hope. We have been blessed with the great task of spreading the seed of God’s word. We don’t need to travel to the other side of the world to fulfill our calling to the mission field. All we need to do is sow the seed right where we are.

It may not be comfortable to be a seed-bearer. Psalm 126:6 shows us that seed-bearing may cause tears,

“He that goeth forth and weepeth, bearing precious seed …”

But it carries the promise of an abundant harvest,

“… shall doubtless come again with rejoicing, bringing his sheaves with him.” Psalm 126:6 (KJV)

No travel required. Just eyes to see the open doors, ears to hear the Great Commission, and a heart to answer his call. Will you accept your call today and look for someone to share his message of redemption with? “Lift up your eyes”, Jesus said, and welcome to your mission field.

Do nothing out of selfish ambition or vain conceit, but in humility consider others better than yourselves. Each of you should look not only to your own interests, but also to the interests of others. – Philippians 2:3-4

Some time ago a stranger visited my church’s Sunday service. He arrived early, while the worship team was still setting up, and the minute I saw him I became nervous. It was clear from his appearance that he’d made a lot of bad decisions in life. His cloths were worn and dirty, while his body had been grossly contorted by years of unhealthy living. I remember doing my best to avoid him as I went about my work, hoping that if I ignored him long enough he’d just go away.

Not exactly my finest moment. In fact, I’d say my attitude was no different than Simon the Pharisee in Luke 7:

“Now one of the Pharisees invited Jesus to have dinner with him, so he went to the Pharisee’s house and reclined at the table. When a woman who had lived a sinful life in that town learned that Jesus was eating at the Pharisee’s house, she brought an alabaster jar of perfume, and as she stood behind him at his feet weeping, she began to wet his feet with her tears. Then she wiped them with her hair, kissed them and poured perfume on them. When the Pharisee who had invited him saw this, he said to himself, ‘If this man were a prophet, he would know who is touching him and what kind of woman she is–that she is a sinner.’” – Luke 7:36-40

This is one of the biggest dangers we face as Christians: becoming exclusive with the grace of Jesus Christ. The Church is not a showcase for saints, but a place where people of all backgrounds can come and say “I need Jesus”. Neither is God’s love ours to withhold, nor are we more deserving of His mercy than the stranger off the street. In fact, the Bible is pretty clear that Jesus made a habit of knocking “Holy” individuals down to size:

Then he turned toward the woman and said to Simon, “Do you see this woman? I came into your house. You did not give me any water for my feet, but she wet my feet with her tears and wiped them with her hair. You did not give me a kiss, but this woman, from the time I entered, has not stopped kissing my feet. You did not put oil on my head, but she has poured perfume on my feet. Therefore, I tell you, her many sins have been forgiven–for she loved much. But he who has been forgiven little loves little.” Then Jesus said to her, “Your sins are forgiven.” The other guests began to say among themselves, “Who is this who even forgives sins?” Jesus said to the woman, “Your faith has saved you; go in peace” – Luke 7:44-50

As for the man at the service, my friend reacted much more graciously. He struck up a conversation with the man and welcomed him to the service. He even agreed to help him go grocery shopping later on in the week. I learned a valuable lesson that Sunday; you cannot love someone by omission, you can only love them through action.

Of course, God has no physical hand, so what does this mean? When a few generations pass, the apostles would lay their hands-on others so that they would be healed or filled with the Holy Spirit or sent out into a ministry calling. Their hands represent God’s hand to bring God’s children to the fullness of His call upon their lives. The picture of God’s gracious hand upon us should give us a rush of joy and encouragement. Surely every born-again child of God has the hand of the Lord upon him in some degree. What can bring that out in a greater display like that which we see in the life of Ezra?

In the above verses we have the reason why. He devoted himself to studying, obeying, and teaching the Word of God. It’s a simple, clear and powerful answer clearly seen in the passage. It is available to every reader. It is the call upon every reader, for whatever your calling is, you need to study and observe and, in some manner, teach the Word of God. There are only a few things that Scripture encourages us to be devoted to. One is the study of and obedience to the Word. The others are to be devoted to seeking the LORD (Jeremiah 30:21), to doing what is good (Titus 3:8,14) and to prayer (Colossians 4:2). It is impossible to do one without doing them all.

Consider: Would you like the gracious hand of God upon your life? Devote yourself to study, obedience, and teaching His Word.

I can do all this through him who gives me strength.
Philippians 4:13
DailyVerses.net