A Little Bunny and a Big Peach 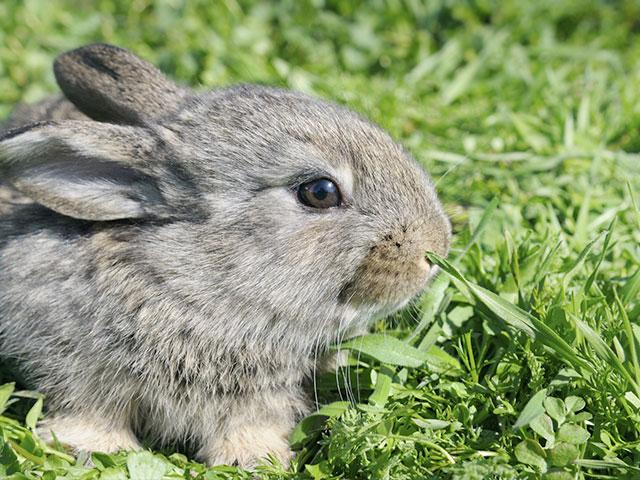 We have a baby bunny that can fit in the palm of my hand. She’s a great pet. She costs nothing, requires little care, and gives us joy every day – she lives in our back yard!

The other day Kristi put out a peach from our tree for the bunny. The bunny was munching away on our green grass, as usual, until she caught a whiff of the fresh peach! She made her way over to the peach, which was just in front of our sliding glass door where we were watching. She put her nose on the peach and smiled. She looked all around her to make sure there were no crows or cats. And then she took a bite!

Oh! How tasty! Much better than grass! With obvious delight, the bunny ate up the peach until all that was left was the pit. And she licked her hands to get the last bits of juice. Then with her stomach totally full of sweetness she stretched out on our sun-warmed concrete patio and smiled, “Ahhhh!”

As I was thinking about the baby bunny eating the peach I remembered the prayer of the Psalmist:

I realized that the Lord had given me a parable and I sensed him whisper to my heart … Will you delight in me like the bunny delighted in the peach? When you savor the sweetness of my Word to you and my Spirit in you, like the bunny thrilled over the peach, then you will be filled with my love, joy, and peace.

Relax! I’m watching over you. And I give myself to you. Hop over to me. Taste and see that I am good.

Yes, Lord, I want to be as the little bunny – trusting your protective care, free to play and explore, observant to discover the gift of your grace, delighting in your deliciousness. As the bunny was captivated by the peach, may I be captivated by you, O Christ! Fill my thoughts. Be my one desire.

Oh, that I’d be as the man you talked about Jesus …

“The kingdom of heaven is like treasure hidden in a field. When a man found it, he hid it again, and then in his joy went and sold all he had and bought that field.” Matthew 13:44 (NIV)

In all that I do today – as I type these words, as I eat lunch with my son in a few minutes, as I clean the kitchen, as I do my work for today, as I greet Kristi and our girls when they return from Marci’s baby shower, as I take pictures of David and his date before prom, as I enjoy dinner and the evening with Kristi, as I pray from the Psalms – may I delight in you with me. Jesus, you are the peach that pleases me!

May Jesus be the peach that pleases you today and every day!

“We are hard pressed on every side, but not crushed; perplexed, but not in despair; persecuted, but not abandoned; struck down, but not destroyed.” 2 Corinthians 4:8-9 (NIV)

I sat in the dimly lit room with soft music wafting through the air and began to relax. No, this was not the prelude to a romantic evening with my husband. It was the aftermath of my yearly eye exam!

If you’ve ever had an eye exam, you’re familiar with the refraction test the doctor uses to determine if you need glasses, and if so, what prescription is right for you. You place your face up to a tool called a phoropter, and then the doctor flips down the first lens, then another, while you say which of the two helps you see the letters on the eye chart more clearly. Lens one or two? Lens three or four? Which one is better?

The eye doctor’s vision test made me wonder if I was looking at my life through the correct lens. Was it possible to flip down a different lens and see a better story?

The Apostle Paul was a man whose physical eyesight waned with the passing years, but his spiritual eyesight remained exceptionally clear. During his time preaching the gospel, he was flogged, whipped and stoned many times. He had been shipwrecked, bitten by a snake, outcast and ridiculed. Several times, he was in lockdown in one place or another. Some of his life was spent under house arrest in Rome, as well as chained to a guard in a dirty dungeon — all for preaching the gospel. And yet, it was during one of those stints in prison that Paul wrote the most joyful book in the New Testament: Philippians.

“I want you to know, brothers and sisters, that what has happened to me has actually served to advance the gospel. As a result, it has become clear throughout the whole palace guard and to everyone else that I am in chains for Christ. And because of my chains, most of the brothers and sisters have become confident in the Lord and dare all the more to proclaim the gospel without fear.” (Philippians 1:12-14, NIV)

Paul also wrote, “I am put here for the defense of the gospel” (Philippians 1:16, NIV, emphasis added). Who put him there? From the outside looking in, it appeared the Roman rulers put him there. But from the inside looking out, Paul knew God had positioned him there. He didn’t see himself as stuck at all. He considered himself stationed. And because he was looking through the right lens, he had joy even in a difficult situation.

I wish this was my perspective all the time, but it’s not. It’s a struggle. I pout, get huffy and become downright discouraged when my plans fall apart or people don’t respond the way I’d hoped. But after settling down, I try to remember to flip the lens and look at my circumstances through the sovereignty of God rather than the selfishness of Sharon. And that gives me a better story. Not because the storyline changes, but because my perspective does.

Let not your hearts be troubled

‘Let not your heart be troubled: ye believe in God, believe also in me.’ John 14:1

Let me say it ought to be a great deal easier for you and me to live above heart trouble than it was to the apostles; I mean easier than it was to the apostles at the time when the Saviour spoke to them and for forty days afterwards. You say, ‘How was that?’ Because you have three things which they had not. You have experience of many past troubles out of which you have been delivered. They had only been converted at the outside three years; they had not known much trouble, for Jesus in the flesh had dwelt among them to screen off troubles from them. Some of you have been converted thirty—forty—what if I say sixty years, and you have had abundance of trouble—you have not been screened from it. Now all this experience ought to make it easier for you to say, ‘My heart shall not be troubled.’ Again, you have received the Holy Spirit, and they had not. The Holy Spirit was not given, as you remember, until the day of Pentecost. His direct government in the church was not required while Christ was here. You have the Spirit, the Comforter, to abide with you for ever; surely you ought to be less distracted than they were. Thirdly, you have the whole of Scripture, they had but a part. They certainly had not the richest Scriptures of all, for they had not the evangelists nor any of the New Testament, and having, as we have, all that store of promise and comfort, we ought surely to find it no hard work to obey the sweet precept, ‘Let not your heart be troubled.’

For meditation: Have you ever wished you had been a contemporary of the Lord Jesus Christ and an eyewitness of his life on earth? That would have been an experience to be valued and never to be forgotten (John 1:14; 2 Peter 1:16–18; 1 John 1:1–3). However, he pronounced a particular blessing upon those of us who have trusted in him without having seen him (John 20:29). We too are able to love him and experience great joy in the midst of trials and temptations (1 Peter 1:6–8).

“Gather to me this consecrated people, who made a covenant with me by sacrifice … call on me in the day of trouble; I will deliver you, and you will honor me.” – Psalm 50:5, 15 NIV

God reminded His people, “the world is mine, and all that is in it” (v. 12). They needed to realize the vastness of His resources and to understand that He didn’t need their offerings. His concern was their attitude, their heart. He called them to fulfill their vows and show gratitude by sacrificing thank offerings.

He had a different perspective on the wicked. Through their lives, they demonstrated hatred for His instructions. They were filled with deceit. They thought they could get away with impure actions or hide behind religious acts. But God knew everything they did and said.

To understand God’s perspective, we need to grasp His holiness and understand the importance of His covenants. He was calling out to the “consecrated people, who made a covenant with me by sacrifice.” He also called on them to pray with boldness and to be so confident that they would “call on [Him] in the day of trouble,” sure that He would deliver them.

Bold prayers were not an imposition but a demonstration of their faith and confidence. They could be bold when they realized that He keeps His promises and honors those who understand His covenant relationship.

When we enter into a covenant relationship with Him, we take His Word seriously. Standing on His promises, we can be bold in prayer and confident that He hears us and will answer.

A generous person will prosper; whoever refreshes others will be refreshed.
Proverbs 11:25
DailyVerses.net