The Warrior’s Key to Peace 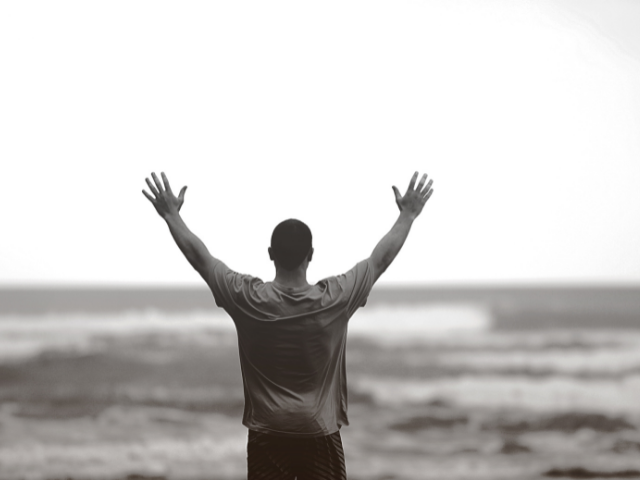 The warrior is in hiding. Pleading with God, he cries out for deliverance and admits his weakness. He is troubled and distraught. This is the scene we encounter as David begins Psalm 55. In his anguish, the battle-hardened man pursues God with earnestness, asking his Lord to listen. David proceeds to state he is living in terror, anguish, and fear. He is overwhelmed. The turmoil he finds himself in is due to violence, betrayal, and a family in ruins — and it has crushed David to the point of envying the birds of the air, who can fly away and flee to deserts and places of shelter.

Yet in the midst of his lament, he speaks light to the darkness in his own soul. David states he calls to God, morning, noon, and night. He reminds himself that God hears his cries of distress, saves him, and keeps him from harm. In this moment, David has benefitted so greatly from vocalizing his pain, heartbreak, and fear to the God he knows hears him, he concludes his Psalm by encouraging us centuries later to

Cast your cares on the LORD and he will sustain you (Psalm 55:22 NIV).

In fact, the heart cry that began in terror, concludes with the declaration,

There is power in expressing our pain, anxiety, and fear to our loving Lord. I’ve experienced this many times. On one occasion just a few years ago, one of my children was involved in a terrifying accident. Doctors gave grim reports. I was living in terror. I was distraught. Heartbroken.

However, like David in Psalm 55, I reminded myself I not only have a direct audience before God; He also loves me and my family. So, I cried out. Literally. I screamed. I voiced my deep pain and anguish — told Him I was terrified. I then experienced what David described in the psalm, as my soul was encouraged that as I cry out, no matter the time of day, the Father hears, cares, and sustains.

Emotionally exhausted, I felt my fear subside and give way to comfort and an infusion of faith. I am humbled to say my son made a full and complete recovery, thanks to doctors, my amazing wife and son, and the power of prayer. I moved forward understanding it is a life-changing experience to pour out my heart before the Lord. David knew this, and his reminder is spread throughout his psalms.

David was brave, a man of action, who surprises us with his vulnerability and fear in his writings. We too will have these moments of trouble in our soul. Voice your heart cry to God, knowing He hears and cares. In those moments, He will meet with you. And instead of desiring to flee like a bird, you also can rise from your knees and declare, “As for me, I trust in You.”

1 Chronicles 29:1 Then King David said to the whole assembly: “My son Solomon, the one whom God has chosen, is young and inexperienced. The task is great, because this palatial structure is not for man but for the LORD God.

David gave, and then he gave some more. The tonnage of precious metals is incredible! And when David asked, “Now, who is willing to consecrate himself today to the LORD?” 1 Chronicles 29:5, the leaders also gave in abundance. The people rejoiced at the willing response of their leaders, for they had given freely and wholeheartedly to the LORD. David the king also rejoiced greatly. 1 Chronicles 29:9 (NIV)Everyone seemed to be totally devoted to making the house of the LORD the most amazing and costly structure ever built.

This passage is a favorite of those raising funds to build new church buildings. Let us never forget that we are speaking of people, living stones, who make up the temple today. The temple Solomon built was a wonderful divinely inspired illustration of what God desires. David referred to it as God’s footstool. The prophet said that heaven is God’s throne and earth His footstool so what kind of house can you build Him? (Acts 7:48) The task is indeed great. In fact, all this gold and silver and precious stones, all the labor of gifted and anointed men could only erect a shadow of the real temple.

The task is great, but now we have the Son of David (Jesus) to do the building. Unlike Solomon, the Son of David is experienced. Will we give of ourselves and our resources to see that the real temple of living stones is built, like they gave to see a passing shadow built? How much more should we be willing to give our treasures and talents to the real task!

Consider: There is surely someone in your life that the Master Builder is transforming into a living stone. How can you give to see the work is completed?

Streams in the Desert – July 31

David cared for them with pure motives; he led them with skill.  Ps 78:72

When you are doubtful as to your course, submit your judgment absolutely to the Spirit of God, and ask Him to shut against you every door but the right one…Meanwhile keep on as you are, and consider the absence of indication to be the indication of God’s will that you are on His track…As you go down the long corridor, you will find that He has preceded you, and locked many doors which you would fain have entered; but be sure that beyond these there is one which He has left unlocked. Open it and enter, and you will find yourself face to face with a bend of the river of opportunity, broader and deeper than anything you had dared to imagine in your sunniest dreams. Launch forth upon it; it conducts to the open sea.

God guides us, often by circumstances. At one moment the way may seem utterly blocked; and then shortly afterward some trivial incident occurs, which might not seem much to others, but which to the keen eye of faith speaks volumes. Sometimes these things are repeated in various ways, in answer to prayer. They are not haphazard results of chance, but the opening up of circumstances in the direction in which we would walk. And they begin to multiply as we advance toward our goal, just as the lights do as we near a populous town, when darting through the land by night express.
—F. B. Meyer

If you go to Him to be guided, He will guide you; but He will not comfort your distrust or half-trust of Him by showing you the chart of all His purposes concerning you. He will show you only into a way where, if you go cheerfully and trustfully forward, He will show you on still farther.
—Horace Bushnell

As moves my fragile bark across the storm-swept sea,
Great waves beat o’er her side, as north wind blows;
Deep in the darkness hid lie threatening rocks and shoals;
But all of these, and more, my Pilot knows.

God is our safe place when the storms of life rage around us.

We’re currently enjoying the warm, seemingly endless days of summer, but this season isn’t all sunshine and beauty. It’s also known for severe storms that bring lightning, thunder, and heavy rainfall. When they pop up, isn’t it wonderful to be able to run into a dry, comfortable shelter and be protected until the sun begins shining again?

Life is like that, too, sometimes. All is well until, suddenly and often without warning, difficulties arise. Our lives are full of “storms” of one kind or another. Regardless of what caused them, there’s seldom much we can do to stop them from running their course. All we can control is how we respond moving forward. Rather than face these troubles alone, we run to our heavenly Father, the One who deeply loves and cares for us—and waits with open arms. (See Proverbs 18:24; 1 Peter 5:6-7; 1 John 3:1; Revelation 3:20.)

A gift opens the way and ushers the giver into the presence of the great.
Proverbs 18:16
DailyVerses.net

Do not conform to the pattern of this world, but be transformed by the renewing of your mind. Then you will be able to test and approve what God’s will is—his good, pleasing and perfect will.
Romans 12:2
DailyVerses.net