What’s There to Gain from Loss?

At this, Job got up and tore his robe and shaved his head. Then he fell to the ground in worship and said: “Naked I came from my mother’s womb, and naked I will depart. The LORD gave and the LORD has taken away; may the name of the LORD be praised.” – Job 1:20-21, NIV

In the next-to-last chapter of Dr. David Clarke’s The 6 Steps to Emotional Freedom: Breaking Through to the Life God Wants You to Live, a few sentences stand out in regard to our personal response to loss:

“You’re stuck if you have not genuinely changed as a person, in your relationships with others, and in your relationship with God. The whole point of loss is change.  Each loss ought to move you ahead in these three areas… God wants you to experience positive change, and one of His main methods to promote change is loss.”

Whoa. When’s the last time any of us has looked at a loss in our lives as something good? As something meant for positive change? As something from which we can gain?

It’s so much easier to become bitter, to stay depressed, to go into denial or to lash out in anger at those closest to us.

When I think back about all the loss I’ve experienced in my lifetime, I don’t know if I can see resulting positive changes every time. Divorce, death, job lay-off, broken relationships, a church split… these are some of the losses that have impacted my life so far. Yes, some have grown me and strengthened my spiritual life.  But others are still a painful work in progress.

In the Bible, Job has got to be the No. 1 poster child for loss. He had it all: great wealth, good health and multiple children. And then one by one, God allowed it all to be taken away.

There was great suffering. Job agonized and felt alone. He cursed the day of his birth. I can imagine him thinking, Please, God, I am so tired of hurting. I have nothing left. Why are you allowing this to happen to me? I don’t know how much longer I can be ‘strong,’ hold it together and act like everything is fine.

But despite losing nearly everything, Job never curses God (although he is honest about his feelings). He honors His Creator and is faithful. Job sees that God’s way is the right way. He repents. And then God blesses him, giving him TWICE what he had before.

God doesn’t explain to Job why he allowed the suffering. And Job is okay with that. In fact, he goes on to live another 140 years: “He saw his children and their children to the fourth generation. And so he died, old and full of years” (Job 42:16-17).

We see that Job’s loss didn’t cripple him. He didn’t shrivel up his spirit and choose the bitter route for the rest of his days. No, what happened to Job only strengthened his relationship with God and matured his spiritual understanding. And that is the ultimate gain.

Like Job, we are to be faithful to God even when we endure loss in our lives.

The Kind of Friend I Want To Be 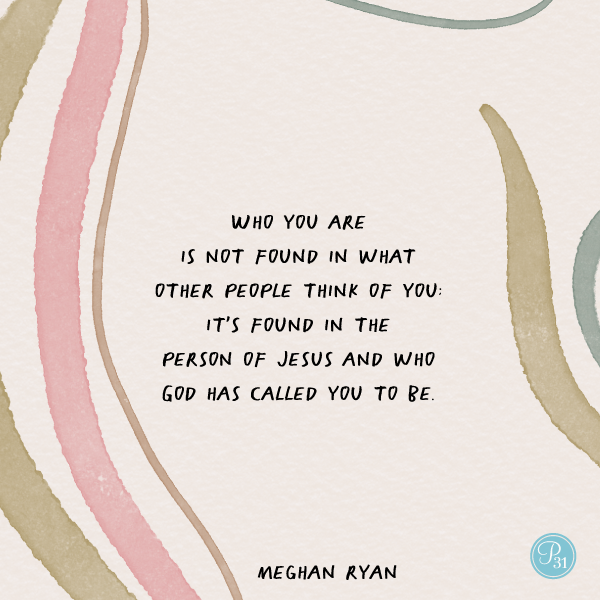 My thumbs flipped through my phone to start scrolling social media. Without much thought of what would pass my eyes that morning, I was stopped when I saw the picture: a group of my old friends, all smiling and looking like they were having the best time celebrating a big life event together.

We all used to be good friends. Friends who, at one time, I would have expected to call me in a moment like this. Things were different now, and when I made some hard decisions to change the way I had been living, it put distance between us. I was still in touch with a few of them, but it wasn’t the same.

No matter how much time has passed, the sting remains. It feels like rejection, and it’s hard not to take it personally. Is it me? Did I say or do something to make them not include me? Do they not like me anymore? Or am I just not a cool enough friend to be included?

I found myself wrestling with all-too-familiar feelings of:
Not being the first choice …
Not getting invited to the party …
Being the last to know someone’s big news …
Only getting called in a crisis and not getting called to celebrate …

In the middle of those emotions, I found myself remembering 1 John 2:20: “But you have an anointing from the Holy One, and all of you know the truth.”

The word “anointed” means “to be set apart.” Meaning that, in Christ, we have the Holy Spirit and therefore are anointed. We have been given a mission to bring hope, freedom and Good News about who Jesus is to a world that desperately needs it.

What is the truth we know? The truth we know is found in the person of Jesus, who seemed to always get called. He got called when someone needed to be healed, (Mark 5:21-43) when the dead needed to be raised, (John 11:38-44) when the hungry needed to be fed (Matthew 14:13-21) and when someone’s sin needed to be called out. (John 4) Most of the stories we read about Jesus involve Him stepping into a crisis and not a celebration. And many of the people Jesus was there for eventually turned away from Him, too.

Sometimes the whole “following Jesus” thing feels like it costs being the “cool” friend.

Even knowing all of this, it’s easy to still want to be the kind of friend who is admired, included and fun. But what do I want more?

I want to make an impact for the Kingdom more than I want to be included in earthly events.

I want my friends to experience freedom more than I want them to think I’m fun.

Can I tell you something else? Who you are is not found in what other people think of you; it’s found in the person of Jesus and who God has called you to be.

We are called to be women who speak the truth in love, (Ephesians 4:15) who spur each other on (Hebrews 10:24) and encourage one another. (Hebrews 3:13) This doesn’t mean we let people walk all over us; it means we have grace and seek friendships where both people are putting effort into the relationship.

The friendships you long for are possible.

This is the kind of friend I want to be.

Psalms 24:1 1The earth is the LORD’s, and everything in it, the world, and all who live in it;

We sometimes think of possessions as being ours. We are stewards over things but for a short time. Everything is from God and will return to God. I am speaking not just of physical things but also power and authority. 1 Chronicles 29:11-12 11Yours, O LORD, is the greatness and the power and the glory and the majesty and the splendor, for everything in heaven and earth is yours. Yours, O LORD, is the kingdom; you are exalted as head over all. 12 Wealth and honor come from you; you are the ruler of all things. In your hands are strength and power to exalt and give strength to all.

Whatever you have, whatever authority or influence you attain to, it is all from God, and it will all return to God. He is all-powerful and so all power is from Him and returns to Him. We need to get a grip on this reality so that we don’t get wrapped up in the idea of possessing things. Your house is not yours. Your clothes are not yours. Your children are not yours. They all belong to God. How should that affect our attitude when we must part with any of these? If we think we own something, we will cling desperately to it and be grieved when it is taken. If we realize all comes from God and returns to God, we can let go, graciously thanking Him for the short time we were blessed to be the stewards of God’s gifts.

This acknowledgement of reality will also keep us from the selfish attitude that God owes us something. Romans 11:35 35 “Who has ever given to God, that God should repay him? We have never given to God anything that was not His already. Now do you still feel as generous about that last big offering you gave? It was God’s already. The act of giving at the leading of the Holy Spirit is just a reminder that we are only stewards who should act according to God’s direction when He tells us to do something with what is His already.

Suggestion: Look around you. Imagine a name label on everything you see, “On loan from Almighty God.” See how that changes your attitude toward all possessions.

“Saul told Jonathan his son and all his servants to put David to death. But Jonathan, Saul’s son, greatly delighted in David.” – 1 Samuel 19:1 NASB

David had become a hero for Israel. He had brought them victories over their adversaries and given them hope.

But because of his successes, King Saul began to see him as a rival. Obsessed, Saul felt that those who supported David were disloyal. Focused on his own interests, he became jealous and insecure and saw enemies everywhere, with David as his primary target.

Saul’s son, Jonathan, had a different attitude. David was a friend, not a rival. Without his father’s jealousy and insecurity, Jonathan could be objective and even trust David.

Jonathan also had genuine affection for David, approaching him “as he loved his own life” (1 Samuel 20:17). While Saul was concerned about himself, Jonathan truly cared about David. While Saul became self-centered, Jonathan was motivated by compassion.

It can be easy to be like Saul: self-centered and focused on ourselves. But Jonathan demonstrated how everything changes when we are filled with God’s love.

Paul described the impact when he wrote that love is patient and kind. It is not jealous. It never seeks its own, but always “rejoices with the truth; it keeps every confidence, it believes all things, hopes all things, endures all things” (1 Corinthians 13:6-7).

Ask God to fill you with His love, so you can be freed from jealousy and not driven to seek your own way. Ask Him to open your eyes, so you might have His perspective on others and even on yourself.

I can do all this through him who gives me strength.
Philippians 4:13
DailyVerses.net