So he stood at the entrance to the camp and said, “Whoever is for the LORD, come to me.” And all the Levites rallied to him.   ( Levites were member of the Hebrew tribe of Levi, especially of that part of it which provided assistants to the priests in the worship in the Jewish temple). 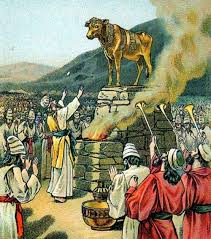 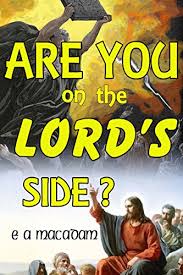 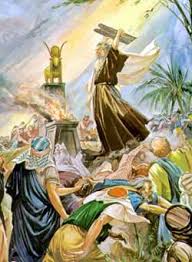 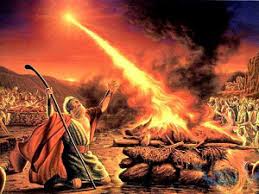 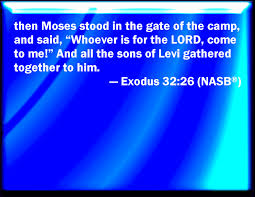 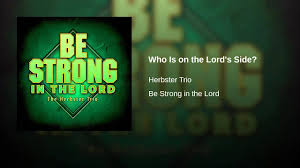 Who Is On the Lord’s Side?

And all the people grumbled against Moses and Aaron. The whole congregation said to them, “Would that we had died in the land of Egypt! Why is the LORD bringing us into this land, to fall by the sword? Our wives and our little ones will become a prey. Would it not be better for us to go back to Egypt?” And they said to one another, “Let us choose a leader and go back to Egypt.”
Numbers 14:2-4

We’re living in difficult times. Enemies that were fought and defeated long ago are rising once again. Demons and dark powers and legions of evil forces are working their way into our communities, our schools, and our families.

And some of us are going over to the dark side. Some are rebelling against godly leaders who are fighting for truth and righteousness and calling for a return to Egypt. Some of these soldiers still bear the scars of battles fought long ago, but have decided they no longer want to fight against the devil. They are calling for change. They have abandoned the One who redeemed them to serve the wicked one.

In some places the defections are large. The grumbling and the complaints that began among a few have swelled into a mighty chorus. The call for change is drowning out the cry for the old paths. Unhappy and discontented, this cry for change is becoming violent in some places.

Thank God there are still heroes among us like Moses and Aaron who fall on their faces before the assembly. There are godly leaders who are not swayed by popular opinion but stand firmly on the Lord’s side.

Thank God there are still brave souls like Joshua and Caleb who stand with these godly leaders. Unafraid of those who are in opposition they cry out, “Do not rebel against the LORD!”

But the people are picking up stones. Indeed, these are difficult times.

Father, grant us wisdom and courage for these days!

On the Lord’s Side

“Then Moses stood in the entrance of the camp, and said, ‘Whoever is on the Lord’s side—come to me.’ And all the sons of Levi gathered themselves together to him.” Exodus 32:26 NKJV

In the midst of tragedies and turmoil, many mighty revivals broke out on both sides of the American Civil War. J.C. Granberry, one of the chaplains of the Southern army, recounted how “in the two confronting camps, often at the same hour, there rose with voice and heart the common strain, ‘All Hail the Power of Jesus’ Name’!”

Granberry noted that, while war waged around them, pastors and chaplains in the Army of Northern Virginia focused on evangelism, and stressed “eternal things, the claims of God, the worth of the soul,” and the need for salvation. The concern was less about winning the war and more about the Kingdom of God.

Soldiers were subject to “severe temptations” and forced to deal with the constant presence of death. But Granberry found that “grace triumphed over all these disadvantages.”

In their camps and battlefields, soldiers were cut off from organized churches and Sunday schools. Because of the pressures of the war, they often did not have a “day of sacred rest.” Yet many made it a priority to seek spiritual growth.

Many openly talked about the things of God. Many carried Bibles on their marches (and even conducted Bible studies when possible). “They delighted in devotional meetings, and were not ashamed to witness for Christ.” Many were reminded of the words of Moses, that they were “on the Lord’s side.”

Today, the world can seem like a divided place, dominated by partisan issues. In your life, remember that you are on the Lord’s side. Focus on serving Him. Seek first His Kingdom. Do not allow yourself to be distracted by the things of this world. Instead, focus on God. Commit your time, talent, and treasure to Him.

In this chapter David is brought before us as a type of the Lord Jesus Christ, ‘great David’s greater Son’. David was God’s appointed and anointed king, but initially only a few accepted him as such; the majority gave their allegiance to Saul, who was rejected by God. They thought they were on the winning side, but it was in reality the losing side. Our Lord Jesus Christ is the rightful king. God has appointed and anointed Him, ”and gave him the name that is above every name” (Philippians 2:9) - but only a few accept Him as such; the vast majority reject him.

1. He needs men who come to Him out of every tribe and nation.

Notice in verses 24-37 the description of the men who came to David out of many tribes. Today, while our King is rejected by the world, the Holy Spirit is calling out a people who belong to Him and are on His side. This is the divine plan - look up Acts 15:14-16, and compare Luke 19:12. Just as the loyal subjects of King David came to him, so the Holy Spirit is calling out men and women today to be the loyal subjects of our Saviour-King - look up Acts 2:47. Do you belong to this company of ’called out’ ones who have been born again by the Holy Spirit (1 Peter 1:23) and redeemed by the precious blood of Christ (1 Peter 1:19)? Do you recognise the Lord Jesus as Saviour and King?

2. He needs men who are separated to Him.

Read verse 8. There can be nothing greater in the Lord’s army than for His followers to be truly separated to Him. Our weakness so often is that we are mixed up with the world - look up 2 Timothy 2:4, and compare 2 Corinthians 6:17; Hebrews 13:13. We live in solemn days, and it is a sad thing when Christians become entangled with the world and side with those who in their hearts reject the King. As you read this chapter you will discover that David required men of quality - selected, separated men. Are you one of these?

3. He needs men who are fully trained and equipped for warfare.

Read verses 2, 8 and 38. How foolish to imagine that being a Christian is an easy-going life! The kind of men our Lord wants is indicated by these verses, which speak of soldiers:-

”…they were armed with bows and were able to shoot arrows or to sling stones right-handed or left-handed…brave warriors, ready for battle and able to handle the shield and spear…Their faces were the faces of lions, and they were as swift as gazelles…men who volunteered to serve in the ranks…fully determined to make David king!”

The warfare in which we are engaged is fierce, and our Enemy is very powerful (Ephesians 6:12), so if we are to be victorious in this spiritual warfare, we must be people who are trained, disciplined and properly equipped. We must know not only how to put on the whole armour of God (Ephesians 6:13-17), but also how to use the two weapons of our warfare:- (1) The Word of God (Hebrews 4:12); and (2) The Prayer of Faith (James 5:15,17,18). And notice, we must be men “who understood the times - see verse 32.

The lions may grow weak and hungry, but those who seek the Lord lack no good thing.
Psalm 34:10
DailyVerses.net

Do not repay evil with evil or insult with insult. On the contrary, repay evil with blessing, because to this you were called so that you may inherit a blessing.
1 Peter 3:9
DailyVerses.net