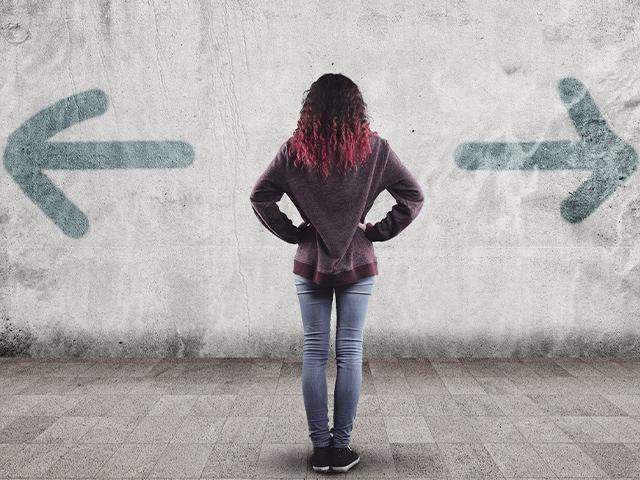 “We have no power to face this vast army that is attacking us. We do not know what to do, but our eyes are on you.” (2 Chronicles 20:12 NIV)

We love choices. From the 1970s “Have It Your Way” Burger King jingle to the more than one hundred drink options in a Coca-Cola Freestyle drink machine, we like to express our preferences and make our selections.

Having designed this characteristic of human nature, God also gives us choices. Unlike one hundred drink flavors in a drink machine, however, He makes it simple. In life, we have only two choices, and these options go way back to a story in 2 Chronicles 20.

At the time, godly king Jehoshaphat sat on the throne of Judah. As is often the case with godly rulers, before long, enemies arrived to try to mess up his good thing. Judah was a shadow of her former self in those days, with an army no one in his right mind would boast about. When the big guys came knocking, King Jehoshaphat knew they were in trouble.

“A vast army is coming against you,” the warning stated. Jehoshaphat was “alarmed” (2 Chronicles 20:2-3). He gathered the leaders from the surrounding cities, and together they sought the Lord.

“We have no power to face this vast army that is attacking us,” he prayed. “We don’t know what to do, but our eyes are on you” (verse 12).

Almost immediately, God responded to Jehoshaphat’s prayer through one of the prophets. “Do not be afraid or discouraged because of this vast army. For the battle is not yours, but God’s. . . . You will not have to fight this battle. Take up your positions; stand firm and see the deliverance the Lord will give you. . . . The Lord will be with you” (verses 15, 17).

With these words, God gave Jehoshaphat two choices: believe the impossibility of the circumstances or believe God’s Word. We face the same decision every day.

Picture the rest of the story. “Jehoshaphat bowed down with his face to the ground, and all the people of Judah and Jerusalem fell down in worship before the Lord” (verse 18). The next morning, per God’s instructions, they marched out to face the enemy with music on their lips and praise in their mouths. “Give thanks to the Lord,” they sang, “for his love endures forever” (verse 21).

Without lifting a spear or a sword, the Israelites won a great victory. The Lord fought for them. By praying, seeking God’s face, and believing His promises, they released the power available in heaven. God brought it to earth for a great victory.

The result? “The fear of God came on all the surrounding kingdoms when they heard how the Lord had fought against the enemies of Israel” (verse 29).

When faced with challenging (and sometimes overwhelming) circumstances, we can either believe what we see with our eyes or trust the promises God has given us.

What enemy are you facing right now? What circumstance steals the sleep from your night and the peace from your days? You have two choices: believe the seeming impossibility of the circumstances or believe God’s promises. If you choose to believe God’s promises, pray to the Lord right now. Like King Jehoshaphat, lay your circumstances before Him, confess your fear and powerlessness, and wait for His direction and deliverance.

2 Samuel 11:13-15 13At David’s invitation, he ate and drank with him, and David made him drunk. But in the evening Uriah went out to sleep on his mat among his master’s servants; he did not go home. 14In the morning David wrote a letter to Joab and sent it with Uriah. 15In it he wrote, “Put Uriah in the front line where the fighting is fiercest. Then withdraw from him so he will be struck down and die.”

The chain of sin that began when David stayed home instead of going into battle was carried even further. David wanted to cover up his adultery by having the husband of Bathsheba sleep with her. Then he would think her child was his own. The faithful Uriah would not sleep with his wife when his fellow soldiers and the ark of God were in tents in the battlefield. David tried harder. He got him drunk, but still Uriah was faithful. Then he sent a letter with him that gave a plan for his murder by not defending him in battle. If David couldn’t cover his sin, he’d have Bathsheba’s husband killed and take her for his wife.

King David thinks only Joab will ever know. God knows! David thought the letter would remain a secret. But now the world has read the substance of his letter. When we plot a sin to cover sin and think that our cunning will keep anyone from knowing, we deceive only ourselves. Be sure your sin will find you out (Numbers 32:23b). When Bathsheba gave birth, the nation knew, and the death of Uriah would be seen as more than a coincidence. David lost respect in the eyes of his nation when his plan was to save his good name. Our sin always costs more than we planned to pay, and takes us further than we planned to go.

Admonition: Stop the cycle before it gets uglier. Repent and ask man and God for forgiveness.

What we have received is not the spirit of the world, but the Spirit who is from God, so that we may understand what God has freely given us. — 1 Corinthians 2:12

I think the apostle Paul’s discussion in 1 Corinthians 2 is one of the deepest in the Bible. If you have experienced what Paul talks about here, you know the Holy Spirit. This is divine wisdom for the mature (2:6).

Paul explains that the Spirit searches “even the deep things of God.” Wow! All who God is, all that God knows, all that God has experienced in the entire universe of galaxies, the Spirit has explored. And what does the Spirit do with that intimate knowledge of God’s thoughts? He communicates to us.

The Holy Spirit enables us to understand God—his holiness so that we fall on our face before him; his unconditional love so that tears of joy overwhelm us; his tender mercy so that we shake our heads at the mystery of God’s grace.

Holy Spirit, open my mind so that you can begin to reveal to me the depths of God, that I may also share your wisdom with others. Amen.

Streams in the Desert – June 3

On that day, when evening came, Jesus said to his disciples, “Let’s go across to the other side of the lake.” — Mark 4:35

Though Christ may delay His coming in our time of distress, it is only that our faith may be tried and strengthened, and that our prayers may be more intense, and that our desires for deliverance may be increased, so that when the deliverance does come we will appreciate it more fully.

Christ gave them a gentle rebuke, saying, “Where is your faith?” Why did you not shout victory in the very face of the storm, and say to the raging winds and rolling waves, “You can do no harm, for Christ, the mighty Savior is on board”?

It is much easier to trust when the sun is shining than when the storm is raging.

We never know how much real faith we have until it is put to the test in some fierce storm; and that is the reason why the Savior is on board.

If you are ever to be strong in the Lord and the power of His might, your strength will be born in some storm.
–Selected

“With Christ in the vessel,
I smile at the storm.”

Christ said, “Let us go to the other side”—not to the middle of the lake to be drowned.
–Dan Crawford

So I say, walk by the Spirit, and you will not gratify the desires of the flesh.
Galatians 5:16
DailyVerses.net