Being Salty – Crosswalk the Devotional 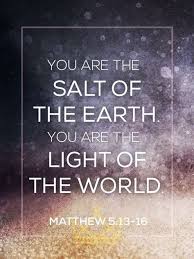 You are the salt of the earth. But if the salt loses its saltiness, how can it be made salty again? It is no longer good for anything, except to be thrown out and trampled by men (Matthew 5:13).

I think sometimes we get so used to our familiar metaphors, we fail to let their significance really sink in. What Christian hasn’t proclaimed brightly: “We’re salt and light!”? And yet, do we really think about the significance of that imagery? In a faith tradition where we have so many great metaphors and allegories, let’s remember to ponder this one that Jesus coined.

What does it mean to be “the salt of the earth”?

As we know too well in our sodium-filled modern world, salt makes things taste better. But condiment connoisseurs will make sure to explain that salt, when used properly, brings out the flavor already present in the food itself. Unlike pepper, which was used in ancient times to mask distasteful rotting and souring in foods such as meat, salt only enhances what’s there.

As Christians, we aren’t here to blot out the colors and flavors around us. We’re not here to ignore or destroy what we see and replace it with something else. Rather, we are to be (tasty) ambassadors of Christ on a mission to draw out and display goodness. God made a good world, and, though fallen, it’s still good! We still have the breath of life from God inside us. So let’s remember to point to the truth and be the people who enhance and brighten wherever we go, not overpower our surroundings like too much pepper.

Before the age of refrigeration, how did people preserve perishable food? That’s right: salt. Something about packing meat with salt slows down the process of decay, making it easier to store, transport, and save meat without it going rancid right away.

Likewise, let us as the salt of the earth remember to preserve what is good. In matters of justice and stewardship, Christians should be front and center to fight for what is right, what is safe, and what brings life to the world around us. Our homes, families, and communities should be solid and fresh, not rotting and fetid.

If we fail to protect and preserve, what good are we? If we fail to enhance the flavor of what’s around us, there’s nothing left for us “except to be thrown out” (so to speak).

Streams in the Desert – April 17

Several years ago there was found in an African mine the most magnificent diamond in the world’s history. It was presented to the King of England to blaze in his crown of state. The King sent it to Amsterdam to be cut. It was put into the hands of an expert lapidary. And what do you suppose he did with it?

He took the gem of priceless value, and cut a notch in it. Then he struck it a hard blow with his instrument, and lo! the superb jewel lay in his hand cleft in twain. What recklessness I what wastefulness! what criminal carelessness!

Not so. For days and weeks that blow had been studied and planned. Drawings and models had been made of the gem. Its quality, its defects, its lines of cleavage had all been studied with minutest care. The man to whom it was committed was one of the most skillful lapidaries in the world.

Do you say that blow was a mistake? Nay. It was the climax of the lapidary’s skill. When he struck that blow, he did the one thing which would bring that gem to its most perfect shapeliness, radiance, and jewelled splendor. That blow which seemed to ruin the superb precious stone was, in fact, its perfect redemption. For, from those two halves were wrought the two magnificent gems which the skilled eye of the lapidary saw hidden in the rough, uncut stone as it came from the mine.

So, sometimes, God lets a stinging blow fall upon your life. The blood spurts. The nerves wince. The soul cries out in agony. The blow seems to you an apalling mistake. But it is not, for you are the most priceless jewel in the world to God. And He is the most skilled lapidary in the universe.

Some day you are to blaze in the diadem of the King. As you lie in His hand now He knows just how to deal with you. Not a blow will be permitted to fall upon your shrinking soul but that the love of God permits it, and works out from its depths, blessing and spiritual enrichment unseen, and unthought of by you.
–J.H. McC.

In one of George MacDonald’s books occurs this fragment of conversation: “I wonder why God made me,” said Mrs. Faber bitterly. “I’m sure I don’t know what was the use of making me!”

“Perhaps not much yet,” said Dorothy, “but then He hasn’t done with you yet. He is making you now, and you are quarrelling with the process.”

If men would but believe that they are in process of creation, and consent to be made–let the Maker handle them as the potter the clay, yielding themselves in resplendent motion and submissive, hopeful action with the turning of His wheel–they would ere long find themselves able to welcome every pressure of that hand on them, even when it was felt in pain; and sometimes not only to believe but to recognize the Divine end in view, the bringing of a son unto glory.

For meditation: This shocking description can give only a faint idea of the just punishment of our sins. Are you trusting in the Lord Jesus Christ to deliver you from the wrath to come? He is able to do it because he suffered the wrath of his loving heavenly Father on the cross (Romans 5:9;

They stripped him and put a scarlet robe on him, and then twisted together a crown of thorns and set it on his head. They put a staff in his right hand. Then they knelt in front of him and mocked him. “Hail, king of the Jews!” they said.
Matthew 27:28-29
DailyVerses.net